Does Teaching Religion In Schools Help or Hurt?

In the United States, every child learns Christopher Columbus discovered America. When I attended school, the books talked about the Native Americans that were already here, but it was presented in such a way that we totally accepted the “reasonableness” of taking over the land. It was not until later, outside of school instruction, that I learned about Amerigo Vespucci. Vespucci's historical omission is rather puzzling considering the continent is named after him. It was also not until later that I understood how the Native Americans suffered as a result of Columbus’ “discovery.” The Columbus story told in schools is somewhat a useful fairytale.

Every child is also taught about George Washington. When I went to school, the schoolbooks wrote beautiful things about him. I never read a bad word about him in any school book. There was a reverence quality to the descriptions of the “Founding Fathers,” especially Washington. But I also remember my Social Studies teacher mentioning Washington was the “father of America for more reasons than one.” She explained he was full-on adulterer who slept with any woman available, and even some that weren’t. I had never read that in a school textbook! 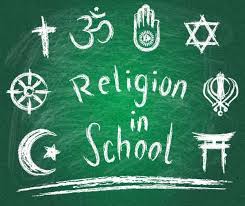 The first time I heard about Islam was my sixth grade Social Studies class. The subject was not actually Islam but cultures around the world. The most I remember is what we learned about the Middle East - that the women could only wear black, were forced to wear a scarf on their head as a form of oppression, were the property of men (first their fathers and then their husbands), and had to walk two steps behind men with their head down. That is what the book said. I remember asking Mrs. Carroll why women had to walk two steps behind men and she replied, “It is required by their religion to remind women of their low status.”

At twelve I decided I did not like people from the Middle East because they treated women badly.

The second time I heard about Islam was in my seventh grade Social Studies class. That class was about all the religions of the world – well the ones considered “major” anyway – Judaism, Christianity, Islam, Hinduism, and Buddhism.

My teacher was Mrs. Nazareth. Though I was in pubic school, Mrs. Nazareth happened to also be my bible study teacher at the church I attended. The textbook did not use the term “Islam” but rather called the religion “Mohamedism,” and said Muslims worshiped Mohamed. [Muslims do not worship the man, but view him as one of the major prophets, the last one, from God.] The book similarly described women as property and without rights according to the religion.

[Funny how both books focused so much on how Islam subjugated women, the exact opposite of what Islam actually does teach, but an actual fact of what men have done historically to women all over the world, even in the United States, usually the exact same way and using the exact same arguments, regardless of faith.]

The one thing I most remember about the class was Mrs. Nazareth’s statement after we completed each religion, other than Christianity, that they were all going to hell because they did not believe in Jesus.

At the time I remember thinking, “Wow! That’s a lot of people!”

Still, at thirteen I decided I did not like Muslims because they were bad to their women and did not believe in the miracle of Jesus and Mary. [Muslims actually do believe in Mary. An entire chapter in the Quran is titled Maryam, Mary in Arabic. Muslims not only believe in the miracle birth of Jesus (though as a prophet) but also that Jesus, and only Jesus, will return to earth before the end of time.]

I always remember these experiences when the topic of teaching religion in schools comes up.

Second, Muslims often believe that having introductions to Islam in schools will help solve the misunderstandings about Islam and Muslims so there is less fear and hate of Islam and Muslims. While I understand the idea, my experience demonstrates the opposite.

The recent introduction of “slaves” as “workers” and "immigrants" in a McGraw Hill textbook, the largest publisher of school textbooks, demonstrates how information can be skewed. [I am not sure “skewed” is a strong enough word.]

Third, even if textbooks could be better representations of information, assuming textbook authors and editors could become exempt from bias and agendas, we still have the human element. How do we prevent teachers from adding to the information in the classroom to support their own beliefs or misunderstandings?

I never got the impression that Mrs. Carroll and Mrs. Nazareth were hateful people. Other than the “going to hell” statement by Mrs. Nazareth, what I learned about Islam in school was mostly from the approved school books. I do not remember them being intentionally offensive about Islam or the Middle East culture, and they equally displayed misinformation about other non-Christian religions and cultures too. They were simply reflecting what they believed to be true, likely with no ill intent.

And this is the problem with believing teaching about other religions and cultures in school will solve our problems. While it could help, assuming it could it least be in the realm of accurate information, it is not enough.

As we know from education in all subjects, the information in the books, and how the teacher presents the information, matters. It is not even practical to let the people represent themselves, or even bring in academic scholars on the topic. Time and money is a problem as well as locating the speakers. Then you still have the problem of bias. Even scholars can be biased. There are actual accredited scholars in the South that promote that the abolishment of slavery was to the detriment of African Americans – that they had a better life, overall, as slaves. [I have also been reading a lot lately about the "myth" of historical female oppression in the west. Confused? I am.]

Even without bias, whom do you get to present for Christianity? Catholic or Protestant? Baptist, Methodist, Pentecostal, or Assembly of God? Though we like to pretend they are all the same, they clearly are not or they would not be separate. While Christians may share some basic general foundations that could be more easily taught without getting into the details, the same could be said for all religions, including Islam.

What we need is participation. If a child of a different culture or religion goes to a school where they are a minority, the parents should actively connect with the school: meet the teacher events, parent-teacher conferences, parent-teacher groups, etc. Parents should know the principal, the vice-principal, secretaries, counselors, administration staff, each teacher, and other parents.

When parents know these people, especially if it is on a deeper level than just “meeting,” a concern often turns into a group working together for a solution. Relationships make a huge difference in both communication and having others advocate with you.

When we do not have these relationships, a lot of assumptions are made – if nothing else than that the parent is being too sensitive or looking for a big-payout lawsuit. Then the school starts “circling the wagons” (calling their lawyers) instead of collective problem solving in the best interest of the children.

What other suggestions would you give to help decrease the misunderstandings about people of different faiths or cultures?
Posted by Unknown at 4:52 PM