A Rose By Any Other Name...

How is your Allah different from the God of Christianity and Judaism?

As a diversity expert I am often asked this question when I am invited as a speaker.  Regardless of the topic, this is often one of the first questions, or something similar.

The simple answer is . . . there is no difference. 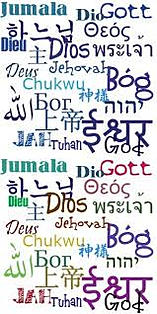 God is the English term for “God.”  Other languages have other terms:  Elohim (Hebrew), Dios (Spanish), Khoda (Farsi), Bod (Russian), Dio (Italian), Gott (German), Jah (Jamaican), Kami (Japanese), and Allah (Arabic). Every single language has a word for God, and very few of them are the same as the English word, though a few are similar.

Allah is the Arabic word meaning literally “the God.” The Arabic language pre-dates Muhammed and the message of Islam by about a thousand years. Prior to the message of Islam, the region was rife with people of faith, including both Judaism and Christianity - so Arabic speakers used the word "Allah" even then.

Muslims, regardless of their native language (Arabs only make up about 20% of the total Muslim world population), often prefer using the word “Allah” when speaking of God because “the God” specifies that there is only one God and because the word “Allah” cannot be made plural or given a gender.

I am not sure she ever got the concept because being Arab and not Muslim was simply too outside of what she had always believed.

Islam is part of the Abrahamic faiths, believing in all the same prophets as both the Jewish and Christian traditions, with the one additional prophet, Muhammed, peace be upon him (pbuh). Islam not only includes the same prophets (Adam, Noah, Abraham, Ishmeal, Isaac, Jacob, Solomon, David, Moses, and Jesus, etc. - peace be upon them all), they also have Arabic forms of the names (i.e. Abraham = Ibrahim, Noah = Nohr, Moses = Musa, David = Dawud, Jesus = Isa). Islam also has the same stories of the prophets – though some of the details or points of the stories are different.

Allah is not a different God, nor is Allah a foreign or other god.  Allah is simply the Arabic term for “the God” which is used by anyone speaking Arabic, regardless of actual faith tradition, and many Muslims trying to make the point that there is only one God – “the God.”

Personally, I grew up with the word “God” already meaning there is only one God, not needing to specify “the,” and that God is genderless, so I often use “Allah” and “God” interchangeably. As my native language is English and I primarily speak to people in English, there is no problem with using the English term because either word means the same thing.


Do you know anyone who says "God" in a different language? Did you think they were talking about a different God?
Posted by Unknown at 1:33 PM