What Else Could I Say?

Several years ago I took my niece to a youth gathering for some fun outdoor activity.  She was entering that awkward just-turned teen age and trying to fit in.  She dressed in a fashionable outfit and, because I told her the gathering was outside, she decided to wear sneakers. Unfortunately, the “fashionable” sneakers at the time were heeled.
We got to the event. It was at a public park.  There were a lot of kids there her age and it did not take long for her to start talking to them.  They played several games, including some running around kicking balls and such.  I saw she was struggling a bit but she never quit participating. 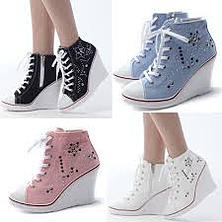 When the event was over and people started gathering their things to leave, the leader of the group asked several of the youth to stay behind so she could talk to them, including my niece.  As I did not know the other kids, I assumed it was because they were first-timers and the leader was doing a check-in – making sure they felt included and maybe giving information on future events.

I almost died for each one. When it was my niece’s turn, there was nothing I wanted to do more than pull her away from the scene and leave.

But I did not do that.

Instead I just waited for it to be over and we left. When we got in the car, I said nothing. I wanted to let her process. I did not want to influence her process with my irritation and opinion. After a while she said, “I never want to go back there.” I simply said, “Okay.”

What else could I say?

I knew the shoes were not appropriate when I first saw them but, I decided me pointing it out would not be helpful. It is a simple fact that teenagers get all defensive about being told what to do, being convinced you just have outdated ideas and they know better. I felt it was better for her to come to her own conclusions about whether physical activity in those shoes was a good idea. Of course I had no doubt she would come to that conclusion - I had tried on those shoes before and thought I would break my neck just walking!

I was disappointed in the youth leader though. Was it really necessary to point it out? And even go further by making them come up with reasons why they made poor choices? First, this was the first time many, maybe all of them, had been to the group activity. Maybe they got dressed without knowing what the activities were. Maybe they had never participated in those activities to know what it involved. Maybe they had not yet learned to evaluate situations and make information-based decisions yet.

While I am all for giving youth information to help them learn things and grow, I also understand using our brains to analyze information and make decisions is the very foundation of true learning and growth.  This was not the appropriate method of accomplishing that task.

Unfortunately, that day my niece learned she did not like youth groups - but completely missed the opportunity to learn how to self-analyze her decisions.  I was really striving for the second one.

Have you ever experienced humiliation during a well intended teaching opportunity? What do you wish had been done differently?

What do you think I should have said to my neice?