Just after the Iraq invasion, mid-2004, I attended an interfaith lunch with just women. One of the ladies hosted it in her home and each of us brought a dish to share. Not only were several faiths represented but several nationalities as well – so you know the food was the highlight of the event!

As we mingled among each other trying the varied dishes and talking about all the topics people at social functions touch on, one lady made the statement that we had invaded Iraq to free the women. I responded (my husband is from Iraq) that the women were free in Iraq. She said, no they had no rights to vote or hold political office so they were not free. I replied, no Iraqi women have had the right to vote and held political offices since the 1980’s. (Of course not a large number in comparison to the populations, but the same can be said of the US). 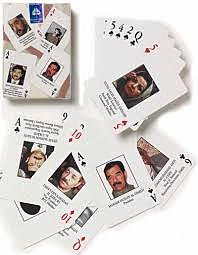 I advised her she was thinking Afghanistan not Iraq.  She again stood firm that she knew for sure the women in Iraq had no voting rights, no political positions, and no access to education.

I then asked her if she had ever heard of the “52 Most Wanted” deck of cards the US had created with the faces, names, and descriptions of the 52 Iraqi citizens the US Government wanted to capture and hold accountable.  She said she had heard of it.  I suggested she should go find a deck to view because at least one of the cards was a woman (not only one), and that woman was both one of the Vice-Presidents of Iraq and a scientist.

Were women in Iraq oppressed in other ways? It depends on the perspective of the person answering the question. Iraq society is not like US society, but is that really the measuring stick? It depends on whom you ask.  I would suggest that women in Iraq are more oppressed today than they have ever been in the history of Iraq, including under Saddam, despite the quota system giving Iraqi women a powerless portion of the political seats. Too bad that.

My suggestion is always, don’t be a follower - even if you are headed in the same direction.