A lot of people ask me about shaking hands with Muslims.  Between same genders it is not a problem. For opposite genders, my advice is to wait and see if the Muslim offers their hand.  If they do, shake it. If not, no need to put your hand out there.

Unlike most people, this was not a foreign concept for me. I grew up in Arkansas and many among the older generations, even among some of the Fundamentalist Southern Baptists of all ages, did not shake hands with the opposite gender. In fact, many years ago “Dear Abby” answered this very question about the etiquette of men shaking hands with women.  She gave the same advice. 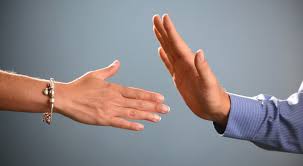 Some Muslims believe any touch with the opposite gender, outside blood relatives and in-laws, is unacceptable under Islam.  Others have decided that shaking hands is a common non-sexual social practice and do shake hands. Still others will go so far as to hug and double or triple cheek-peck members of the opposite gender, even non-relatives. I’ve seen it all, so I know it is a personal decision.

When I became Muslim I was faced with this dilemma. In addition to working in a professional office environment, I also spent a lot of time at interfaith events. Meeting new people was the norm. I asked other Muslims how they handled it and also I observed how other Muslims handled it.

One of my closest friends, who had become Muslim many years before, told me she chose not to shake hands with the opposite gender. Her reasoning was that, though shaking hands was not sexual in nature itself, the act often led genders to get a little too cozy – like instantly hugging upon greeting or inadvertently touching while talking. She felt by not shaking hands she was physically reminding them of the barrier between them.  The way she handled it was to either to explain that she did not shake hands with men or, her preference, she would try to have her hands full.

While I was still mulling this information around (I really did not see how shaking hands would lead to hugging), I observed an interaction during an interfaith event at a Mosque in Tempe, Arizona.

One of the male Muslims was greeting guests upon arrival. He shook hands of the men coming in. Then a man and woman came in together. He shook the man’s hand and then turned to the woman to explain that he did not shake hands with women. I saw her tense and her smile freeze. He then explained that it was his way of showing respect for women and that he only touches woman of his family. Her eyes narrowed, and though she was still technically smiling, her eyes gave her annoyance away.

I realized right then that there was simply no good way to explain the situation. American women have too much history of discrimination against women, and the backdrop belief that Muslim men hold themselves as better than women is too engrained. Maybe if the woman had observed a Muslim woman refusing to shake hands with a male it would have helped. I don’t know.

As a result, I decided not shaking hands, as a professional, was just not practical.  Taking the time to explain, or attempt to explain, to each person would distract from the relationships.

After a few years I attended an event with several Muslim leaders. As was often the case, I was the only woman at the meeting. Following the meeting we were escorted to another room where the media was waiting. I was the first to enter the room and immediately saw a reporter I had worked with many times. He approached me with a warm welcome… and promptly gave me a big hug before I could do anything… just as all the religious leaders walked in behind me.  Well . . . crap.

It appears my friend may have been right. I always shook hands and I guess this just removed any idea of a boundary with this guy.  So back to the drawing board of evaluating whether or not to shake hands.

In the end, I decided there was more to lose by not following the social norm of shaking hands. Putting up boundaries, subliminal or symbolic, is not a good way to form relationships – and forming relationships through communication is what I do. There are enough obstacles without me creating more.

Am I right? For me, yes, absolutely. But I do not profess to know what is best for others. This is one of those things each individual person has to decide for himself or herself - because in the end this is about your own intention, not the intention or thoughts of others.

Do you, or do you know someone, who does not shake hands with the opposite gender?  How do you feel about it? Do you have any suggestions on how to handle it?
Posted by Unknown at 12:10 AM