Recently, I was sitting talking to another Muslim.  We covered several topics and then he asked me, "How do you handle all those people who have websites and speaking careers dedicated to spreading hate and fear for Muslims and Islam?"  I replied, "I ignore them." He responded, "But they have thousand of hits on their websites so thousands of people are being taught to hate us. How can you ignore that?”

Let me let you in on a little secret.

At least half of the hits on these websites are from Muslims obsessed with finding out what the latest attack is. If Muslims stopped looking at these websites, their traffic would likely reduce by half.

The other half is a combination of other curious people, members of the media looking for stories, and believers of the message. In my opinion, the believers are the minority. 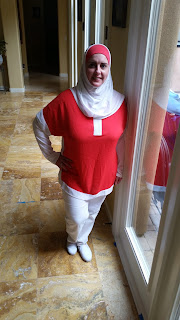 Are there haters in the world that treat Muslims bad? Sure.  Just like their are haters who treat African Americans bad, Native American bad, Asians bad, women bad, and on and on. But again, they are the minority.

One Friday, I had just finished with a client at my office and was on my way to meet another client at their home. A quick bite was in order and Long John Silver's was on the way. I had dressed in white plants, a white long-sleeve shirt, and a bright orange short sleeve shirt on top.  I also had a matching orange under scarf with a white scarf over it. [I happen to love color!]

I walked in and stood just away from the registers looking at the menu trying to remember what I used to order since it had been a while. Between me and the counter was a woman. I saw her turn around and look at me, so I smiled. She smiled back, took a step toward me and held out her hands. She had several coupons. She said, "I have all these coupons. Would you like a coupon?"


I took a step toward her and said, "Well, what do you have?" She went through the coupons and said she had a coupon for a 'Platter Dinner.' I looked at the menu and saw that what I wanted to order was under 'Meals.' So I said, "I will order the #5, is that different than a platter?" She said yes, and proceeded to show a coupon for a 'Family Deal' - as in a lot of food.  She obviously thought since I was alone I must be getting a to-go order for my family.  I said, “Thank you so much but I am getting just a meal for me.”

I then walked up to the next register where a young man in his early 20's was ready to take my order. He greeted me and I ordered. I then turned to walk over to the fountain drink area and an older woman stopped me to let me know, "The diet Pepsi is out and they are replacing it." I thanked her and told her I planned to have a Dr. Pepper.

After I sat down to wait for my order, the same young man that had taken my order walked over to my table and asked if he could ask me a question. After I said yes, he asked if I was a Nun.  I said, “No, I am a Muslim.”  He thanked me, smiled and walked away.  When he delivered my food very shortly after, he apologized if he offended me.  I told him he did not offend me and I get the question all the time. He said, “I only asked because I really like your dress.” (the white and orange combo)

As I was eating, the manager walked by my table to deliver someone else's order, but he paused at my table to ask if I was enjoying everything.  I told him I was.

Once I finished and was walking toward the exit, the girl behind the counter wished me well. Just before I exited, the young man who had taken my order, who was also at the other end of the restaurant, loudly thanked me for coming and wished me a good night.

I could talk about this story as it relates to customer service, one of my pet-peeves since I worked for many years in the service industry, but what really struck me was that everyone does not hate Muslims.  That is not my experience – and I really get around I assure you!

Most negative experiences, honestly, are just ill-mannered, rude, unhappy, stressed out, normal people. You do not have to be Muslim to come into contact with them and have a bad experience. Sometimes we are those people ourselves. All of us are human and sometimes we forget how our behavior looks, and feels, to others.

The Long John Silver’s experience is the vast majority of my experiences - maybe not so many at one time, but definitely the norm. Perhaps it is due to how I carry myself.  I wear lots of color and prefer western clothing. I believe this does make me seem more approachable. I am not saying that is what others should do. It is just my personality.

My best advise to those who believe everyone hates Muslims is to get out more. Widen your circle. The vast majority of people are nice and friendly people who just do not know you yet. But they really do want to. Really. So stop being so stingy with your wonderful self and give them the opportunity!

I absolutely make you this promise. A short conversation with a stranger will bring way more rewards than bad experiences - and will put you on a path of more days of joy because connecting with another human being is the best way to make the world a better place.

Are you open to connecting with strangers? What have been your experiences?
Posted by Unknown at 9:11 PM