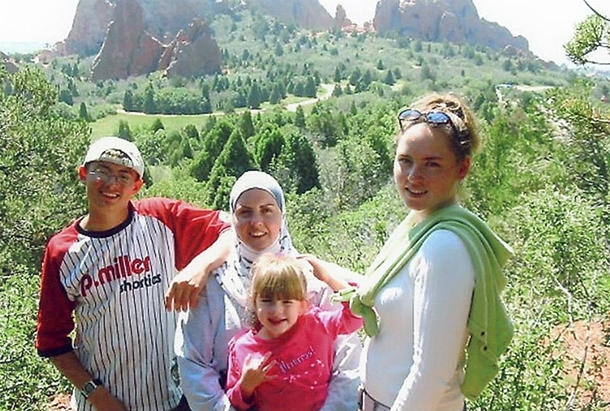 In the summer of 2004, I went with my sister, my nephew, and a couple of my nieces to Colorado Springs, Colorado.  It was within the first year of the Iraq invasion and, for those who may not know, Colorado Springs is a very conservative Christian area, hosting several national conservative Christian organizations and radio programs, as well as a highly patriotic area with three major military bases.

The main thing I wanted to visit while there was Pike’s Peak, “America’s Mountain” and one of the most famous Rocky Mountain Peaks. I had learned about it in middle school and always wanted to visit it, which we did - riding the train to the top and taking in the spectacular views.

But we were there for a few days, so we decided to explore other local attractions.  Two we chose were the Flying W Ranch, for a “chuck wagon supper and western stage show,” and a laser light show at Cave of the Winds.

We arrived at the Flying W Ranch about 30 minutes before they opened the doors for the dinner and show.  The ranch is a small western town with shops and buildings just like you would expect if you were alive during the cowboy days. We walked around and enjoyed the scenery until it was time to enter the dining hall.

The dining hall was arranged with long tables for community dining, so we joined other families and groups at a table near the stage.  The Master of Ceremonies (MC) greeted everyone, told a few jokes, and then explained how we would all “go fill our plates” in an organized manner.  Then he said, “Before we eat, as we always do, we will say a prayer to thank God for our blessings. Anyone who does not want to join in our prayer is still welcome. This is our tradition and we respect if you have another tradition. Our country was founded on freedom of religion and it does not make any sense for us to not respect that, especially now.”

As I lowered my head to pray, I did not notice the choice of others. After the prayer we got up, following the instructions, got our food, ate, and visited with some of the other people at our table. Later, everyone went on his or her way.

The next major attraction was the laser light show.  We arrived, got our tickets, and then found seats, again near the front. The area is set up like an outdoor football field with bleacher seating. In front of the bleachers, like a football field, was a kind of grassy yet rocky field with a backdrop of mountains.

The announcer greeted us over the loud speaker.  He then said, “Before we get started with the laser light show, we will start with a prayer. If your practice does not include prayer, or for any reason you do not want to participate with our prayer, know that is okay. This is part of our faith but we understand everyone does not share our practices. Our military is far away, putting their lives in danger fighting for freedom, and we do not see how we can ask them to do that if we are not protecting religious freedom at home.”

After the prayer was over, the most beautiful laser light show I have ever seen danced along the mountains.

Though I doubt it, a rational explanation for the MC’s speech could be that he saw me, the neon sign that a Muslim is present, right there in the front row. But that could not be the case for the laser light show. The likelihood that the announcer even knew I was there among the large audience is unlikely.

While I was not looking for negativity, I can honestly say I would not have been surprised given the backdrop - but instead I experienced collective American and Christian values like I have never experienced anywhere else in the world, before or since.

This entire trip was really a life changing experience for me.  I have never forgotten it and I have told the story many times over the years. This was not just tolerance; this was true acceptance.  This was not just a practice of a religion; this was demonstrating the true understanding of the essence of the faith, of God, while also understanding the essence of the United States.

All people, of all faiths, could learn a few things from the people of Colorado Springs – even more so these days.
Posted by Unknown at 6:00 AM