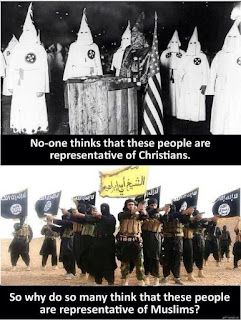 While scrolling through Facebook, I saw a post with a half and half picture. The top was a picture of the Ku Klux Klan all decked out in their white sheets, with the statement, “No one thinks these people are representative of Christians.” On the bottom was a picture of ISIS all decked out in their black ninja-looking out-fits, with the statement, “So why do so many think that these people are representative of Muslims?”

I had seen the post before. I casually scrolled down, planning to move on to the next post, when I happened to notice the comments.

Commenter 1:  MEDIA MEDIA MEDIA
Commenter 2:  too many people behave like lemmings.
Commenter 2:  they don’t think for themselves
Commenter 3: It boils down to racism. Plain and simple.
Commenter 4: Maybe because “regular/non-violent/moderate muslims” don’t speak out or condemn them. Or maybe the afore mentioned muslims seem to turn violent so easily or often.
Commenter 5:  Many “moderate” Muslims speak out. They are just not given much coverage in the media.

I could talk about the extensive and continuous “speaking out” Muslims and Muslim organizations have done both in the United States and internationally. [These days our biggest concern is how to make a condemnation statement today that is different from every other one we made this year. Gotta keep it fresh!]

I could talk about whether the media does in fact give less coverage to Muslims “speaking out.” [Only one media outlet showed up for the press conference today? Only one newspaper printed the condemnation press release? Though the condemnation statement was sent at 5a.m., some television stations did not mention it at all while others mentioned it only in passing, once, and only during the lunch hour news? Well that’s not gonna make it on anybody’s radar!]

I could talk about the reality that “Muslims,” as a broad group, do not in fact “turn violent so easily or often.” The FBI national combined statistics for homicide and violent crime in the United States for 2013 was 1,177,342.  If all Muslims, or even the majority of Muslims, were more susceptible to violence, surely that number would be closer to the Muslim population of 3 million living in the US? Further, even minor research shows that the majority of the 1 million U.S. homicide and violent crimes were not committed by Muslims either. [Neither can the blanket statement be made internationally, for similar reasons, as well as complicated situations specific to each region or country and whether Muslims are the majority or minority of the country.]

But what got me was the “moderate” Muslim.

It is not lost on me that this topic is similar to another topic I wrote about, But if thought corrupts language, languagecan also corrupt thought.  In a way, I could have just replaced “moderate Muslim" for the word “Islamist” and made a similar point.

But I didn’t because, though similar, the topics are actually not the same.

While “Islamist” is a new word, “moderate” is not. To Muslims, “Islamist” is less offensive because the majority of Muslims do not believe the term applies to them. We may take offense when someone attempts to give us that label. We may take offense when we witness someone else being labeled “Islamist” that we know does not fall under the definition [whatever that is]. But since we do not identify with the label, we can more easily “blow it off” because we know it does not apply to us.

Kinda like if someone calls us fat.  It may be offensive and upsetting but, unless we have our own issues with possibly being fat or are worried about what others think about our body size, we can “blow it off” because we know it is wrong about us.

“Moderate” is different. Islam teaches us to be “moderate.” “Moderate” is a word closely associated with the practice of Islam. "Moderate" in Islam means "middle of the road" - not too hard, not too soft - and is specifically mentioned or referred to throughout the Quran. “Moderate,” or "middle of the road," is what Muslims are supposed to strive for.

We very rarely see it used to describe Muslim religious leaders, Muslims scholars, or other Muslims we admire – or even know.

The average Muslim is unsure whether to take it as a complement or an insult if someone says we are “moderate.”

Do you know a Muslim you would call "moderate?" If so, why?

Have you ever been called "moderate?" What did it mean to you? 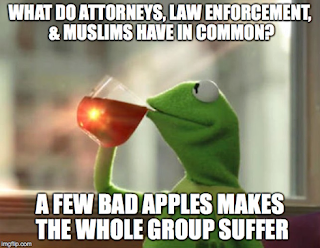