Is All Hope Lost After Paris? 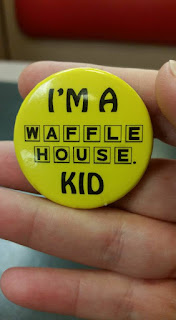 I woke up bright and early this weekend feeling so happy and grateful. I got up and watched the sunrise before driving to Waffle House for breakfast – my happy place.

While I was enjoying my lovely cheese eggs, raisin toast, and grits, my waitress gave me a beautiful pin that says, “I’m a Waffle House kid.” And yes I am.


You might wonder how I could feel so happy considering what has been going on in the world over the past few days. Believe me, I was reeling. I just returned from vacation in Malaysia. (It was outstanding!)

I left Malaysia and upon my first stop over in China, my husband texted me that several ISIS bombs had exploded in Iraq. When I changed planes in Los Angeles, 15 hours later, I saw a news report that “Jihadi John” had been killed. Six hour later when I landed in Phoenix, the friend who picked me up from the airport explained the many ISIS explosions in Lebanon. I woke up the next morning in my own bed to the news of the ISIS bombs in Paris and Kenya as well as the earthquake in Japan, then Mexico.

What an uncanny feeling to be “out of touch” on an airplane and receive shocks at every stop.  It was weird - like time travel or something. I felt like Marty McFly must have felt each time he landed in a different time and was shocked by the changes, good or bad, that to him occurred within a few minutes.

While in Malaysia, the Russian plane exploded over Egypt. I saw hateful comments and news broadcasts constantly when looking on the Internet. Facebook was full of hate and negativity. For the first time since being on Facebook, I actually considered de-friending someone. I have never even considered it before. I did not do it, but I thought about it for two whole days.

It is interesting to note that the television I saw overseas, such as CNN International, were not the same as CNN in the United States. The broadcasters, commentators, and guests were all talking at a much higher level – no yelling or arguing or boisterous comments – just discussing issues from a lot of different perspectives.

But after the Paris bombings things changed. The reason I am so happy, or maybe hopeful is the better word, is because I see things differently today than even last week. The positive comments, the loving comments, the rational comments have actually been more than the hateful ones. And the negative comments have been mostly based in fear. I can deal with fear so much better than hate.

Hate is ugly. Hate is not rational. Hate can only be combated with personal contact, and maybe not even then. It is difficult to talk about hate. People who hate may want to share their hate, but they do not want to have a real conversation about it.

But fear… fear is different. Fear can be both rational and irrational. Fear can make sense. Fear can be addressed in many ways. Fear can lead to hate, but we can still talk about fear.

So I am hopeful. So I am talking. So I am putting myself out there in person and online. And I am encouraging others to do the same. Now is not the time to hide in our homes. Now is not the time for those of us who have the ability, skills, and desire to make the world a better place to withdraw.

Now is the time to put our “big girl panties” on, be strong, be loving, be happy, be hopeful, be the change we want to see in the world.

We do not all have to go on television, rally in the streets, or be public speakers – we just need to be ourselves. Be present. Be available. Be approachable. Be friendly. Be Compassionate. Be love.

Because love and human connection is what the world needs, now more than ever – and it is the only thing that will combat the hate and fear.