How Far Would You Go To Make Peace?

When I was about thirteen I really wanted to go to a youth lock-in being held at the church I attended.  A youth lock-in is where the Christian youth go to a church or another location for fun and games mixed with some Christian teaching all night. After the set arrival time, the doors are locked and no one can come or go until the set departure time after sunrise.

I was so excited to go and had chosen a nice dress, pink with gray designs outlined in black. But I did not have any dress shoes.

I was the youngest of three sisters, all of who had dress shoes and we all wore the same size.

I went to one of my sisters who had both gray and black dress shoes, either of which would match my dress perfectly. I asked her if I could borrow a pair. She replied that she had plans too and would need shoes as well. I asked her which shoes she would wear because either would work for me.  She replied she had not decided which ones yet, so she could not let me borrow either.

This went on for a while and the time to leave for the lock-in was getting closer. I began to panic. I started begging and pleading with my sister to borrow her shoes. She was relentless in her indecisiveness.

She then told me to get on my knees and beg. Without even a thought, I did just that while I began to cry. She started laughing. I looked up at her in complete confusion.


As she continued to laugh, she said, “Of course you can borrow my shoes. I just wanted to see how far you would go.”

I was so happy to get the shoes and go to the lock-in, I never really took the time to think about what had happened beyond that it was mean. I spent the night at the lock-in, having fun, and practically forgot all about it. 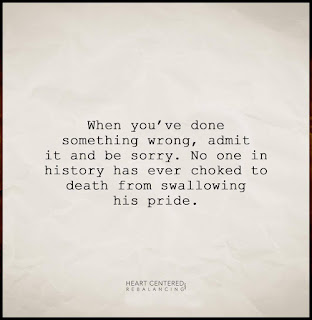 Years later, as an adult, I got into a verbal argument with another woman only a few years older than me. It was very heated.

Later, I was encouraged to apologize to her to make the peace. Though I felt that I was the one wronged, I also understood I had made the mistake of allowing myself to become offended and responding.

Now I had to decide whether to be “right” and continue an uncomfortable situation, or apologize and make peace.

I chose to make peace.

I went to the woman, who was with her teenage daughter, and asked if we could speak privately. She responded, “Anything you want to say to me you can say in front of my daughter.” I asked again to speak privately. She made the same reply. I made yet another request and pointed out that it was a private and adult conversation. She finally relented and we went to another room.

I can only imagine that my determination came from a very sincere desire to make peace. I continued to apologize, trying not to justify my actions in any way.

She then told me to get on my knees and beg for her forgiveness. Without a thought, I fell to my knees, bowed my head, apologized, and asked her to forgive me. She lifted her hand while looking down at me and told me to kiss it while asking for forgiveness. I did both.

She said okay, that she would accept my apology, and then proceeded to explain to me “my place” – which was beneath hers. I plastered a smile on my face and held my tongue.

I had made peace. At the time, I thought what I had given up was less than I had gained.

But unlike the incident with my sister, this incident stayed in my mind for years.  I analyzed it. I dissected it.

No one who knows me, even superficially, would suggest that I have a low self-esteem.  Overall, I would say the same. It is not that I do not have doubt. I often experience doubt but I also believe in myself and know that I can accomplish anything I set my mind to. My self-analysis and reflection is both my gift and my burden – always considering how I can improve my character.

At the time, I believed peace was of the utmost importance. I was so focused on making peace I did not consider what was being asked of me. I did not have time to think about the symbolic meaning of what I agreed to do, what it would do to my own self-esteem, or my relationship with others. I simply wanted peace and humbling myself to apologize, even though I sincerely believed I had been the one wronged in the argument, seemed like a small sacrifice.

But it did have consequences.

Bowing to another human in submission is different than showing sincere respect, such as with a parent, but it is a small distinction that can quickly be abused. It affects both the person submitting and the person demanding it on a very deep level.

The submitter loses a part of their self-respect, their belief that all humans are created equal – that the submitter is equal to others. The demander, on the other hand, becomes intoxicated with a feeling of being powerful over other humans – that the demander is indeed of a higher status than others. Both are dangerous to humanity.

It is no wonder humans have demanded this action from other humans throughout history.

At the time I thought it had no affect on me. I was wrong. For a long while it caused me to feel that I needed to demonstrate my strength and to close off any outward appearance of vulnerability. It also caused me to become more sensitive to perceived disrespectful behavior toward me.

It took a lot of years to come to terms with this and make the decision that it was not the way I wanted to be.

Strength comes from the inside - it does not always need to be swung like a hammer. Vulnerability is not a weakness. It can actually be a better source of strength than a hammer. Humbleness is one of the best characteristics a human can have. Mistakes are lessons, though sometimes the lessons are not as obvious as we think.

But the most important question is, would I do it now? Part of me says absolutely not. Another part of me understands we cannot make such predictions when we are not in the situation. If I felt the stakes were high enough, I am honest with myself enough to know it is not outside the realm of possibilities.

Do I think that situation had high enough stakes? The first time, for the shoes, absolutely not. I was a teenager, and for a teenager, the right shoes actually does seem like the end of the world.

The second time? At the time, I really did think the stakes were high. Now?  I go back and forth. A lot of other people were affected by whether peace existed – but only I had the power to make the peace for everyone. Mostly that makes it worth it for me.

Do I regret submitting to the demand? For a time I did. But it was a good lesson for me. At least I can look back and know my arrogance did not prevent me from doing the right thing, which was to make every effort for peace. 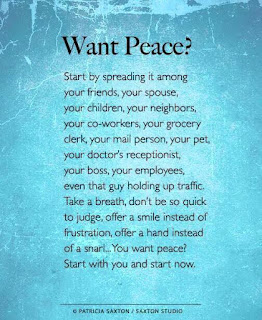