The Fall of Islam

While on a recent panel, an Imam (Muslim religious leader) sharing the stage made the comment that the persecution of Jesus was the fall of Judaism, the Spanish Inquisition was the fall of Christianity, and ISIS/ISIL/Da’esh will be the fall of Islam.

That got me thinking. It was a very interesting comment. The “fall” he referred to was not the extinction of the religion, or even the curtailing of its numbers, but rather a power check following a reflection of values.

But I think that the analysis can be taken further. The fall of the Greek and Roman Empires followed their own progressions into grave injustice. The fall of Germany also followed Hitler’s grave injustices. The British Empire is not what it used to be, largely due to the injustice Gandhi brought to the world’s attention.


I could go on but I think the point has been made. Grave injustice leads to the, eventual, loss of power - or at least a reorganization of it. The actions of the Taliban, AlQaida, and ISIS/ISIL/Da’esh are the grave injustices of today. I would even argue their power is exemplified simply by the fear they have been able to extend around the world, despite their small numbers and limited area of control. But what does that mean for the world?

Well, in the short-term it could mean a lot of hardship. No power likes to give up its power – and history has shown those in power will do a lot of evil things to stay in power. It is also likely to mean a change in a lot of governments. Some will be well deserved. Some may be just collateral damage. Some will just be the replacement of one dictator or kingdom for another “acceptable” figurehead.

We have already been seeing this in the Middle East but likely it will get worse in the region and even spread to other regions. I am not predicting WWIII, God forbid, just more instability for several countries.

But that is on the large scale. What about for Muslims? We are being repeatedly told we Muslims are the source of all the problems in the world now, or at least the big ones. We are being challenged to leave our Muslim identify behind. Some Muslims no longer feel safe.

It can be scary not to feel safe. Unfortunately, a lot of people who are not Muslim also do not feel safe - and not just due to the threat of terrorism.


Feeling unsafe, or at least not secure, is by far the dominant feeling for most people today.

But history also shows us it can be a blessing not to feel safe. Our faith and identity being challenged forces us to rethink some of our previous ideas. 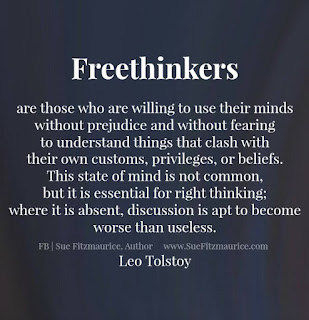 Islam is an intellectual faith and Muslims have always been proud of that – there is no reason to fear it now. Only our own ignorance should be feared. Prophet Mohamed (peace be upon him) said, “Seeking knowledge is obligatory on every Muslim.”

The original intellectual challenge is contained in the Quran itself. When our faith is challenged we are given the opportunity to dissect our beliefs – to no longer randomly parrot quotes but really understand their meaning and put them into practice in our daily lives.

It is a reality that some of our ideas will be dropped – not because we are confirming to a larger society or changing the religion, but because we will grow to understand it.

We will become both spiritual and intellectual about our faith – not blindly following what someone else says or does, but knowing why we do the things we do and why we believe what we believe.

One of the best ways to understand any idea you have is to try to argue the opposite idea, or at least study it. God does not fear, but encourages, our search for knowledge. I have often encountered Muslims who, while correctly performing a particular practice, have absolutely no idea why.

An example would be walking into a room with your right foot. Yes, the Prophet Mohamed (peace be upon him) did it, but why?

It is not because our left foot is somehow inferior. Rather it is meant to be a reminder to do “the right thing.” There is no benefit in remembering to walk into a room with your right foot if you are not doing the right thing once you get there. Prophet Abraham (peace be upon him) specifically taught us not to simply follow the religion and practices of our ancestors but to make it a point to use our brains and know God through his teachings.

I have also encountered Muslims who proceed to correct other Muslims with misinformation about Islam. For example, I have heard Muslims question whether a man can marry a woman older than him and even heard men state Muslim men cannot take direction from women.

Really?! The first wife of Prophet Mohamed (peace be upon him), Khadija (may God be pleased with her), whom remained his only wife until her death, was twenty-five years older than him and she was his employer – his boss.

I am clueless as to where the confusion lies.

These attacks on our faith will, hopefully, push more of our community to not only learn their own faith and separate it from their culture, but also cause other Muslims to more readily correct each other on gross misunderstandings that have no place in Islam.

Muslims can and should lead by example. We cannot simply quote the beauty of Islam. We have to live it. But to live it, we have to know it.

Challenges are what let people know their true inner grit. We can choose to rise to the challenge or not. The choice, as always, is ours.