Is Chess Forbidden in Islam?

I read that a "Saudi Grand Mufti (the Kingdom's top* cleric)" made a (fatwa religious opinion) that Chess is forbidden in Islam because it is a form of gambling - "a waste of time, money and a reason for enmity between players."  Twitter lit up in opposition and sarcasm, including many Muslims.

There is a lot of confusion about what a Fatwa is and what it means when a Fatwa is proclaimed. The media only sensationalizes it and increases level of misunderstanding.

However, in a very few countries, like Saudi Arabia, the government does control who is allowed to be a "cleric" (religious leader/religious scholar) as wells as creates a hierarchy. What is required for the appointments, however, is arguably, due to the "appointed" status, at least to some extent, political - as in meeting a standard set by the government rather than the people.

That is not to say that Saudi clerics are not knowledgeable or credible. They have been through extensive schooling and study about Islam according to an approved educational system and a specific school of thought - though scholars usually study all schools of thought, to some extent, within their education.

However, there are many schools of thought, which is why all Muslims do not have carbon copy beliefs and practices. Also, some Muslims are less strict on following only one school of thought.

The best religious scholars, or clerics, consider all the facts about a problem or question before stating an opinion. Additionally, clerics occasionally state an opinion for a particular problem for a particular time and place, without intending the religious opinion be applied globally. Clerics also sometimes issue an opinion that something with good benefits is forbidden because the bad outweighs the good.

However, like many people with knowledge and titles, clerics occasionally state opinions without considering the entire situation.

This is why it is so important for Muslims to consider who, what, when, where, and why before adopting a religious opinion - and many do. Because a "fatwa" is simply a "religious opinion," Muslims have a choice whether to listen to, and/or follow, the opinion. This causes more confusion when the media highlights a "fatwa" and yet no Muslims are following it.

Chess is not Forbidden under Islam 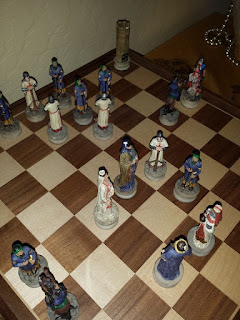 I believe this opinion was given by the cleric without fully understanding the situation, or for whatever reason, not wanting to address the actual problem directly.

I appreciate that the Saudi cleric has recognized gambling by some Muslims seems to be out-of-control. While not all Saudi's gamble, it is well known that many Muslims from Gulf countries, including Saudi's, have begun gambling on just about everything. Within Saudi, camel racing involves heavy gambling. Personal car racing, all over the world, now involves heavy gambling among many Muslims. Gambling has become so rampant that simple conversations about whether a fact is true or not includes a wager - before someone googles the answer.

No doubt chess has suffered the same fate.

Chess involves winning and losing - a perfect situation for gambling.

Chess also involves learning strategy, planning, forward thinking - all valuable skills in everything from family to economy - and not a waste of time because you simply cannot play without learning the skills.

Gambling is clearly, without question, regardless of school of thought, forbidden in Islam.

However, gambling is the problem, not any sport or game.

The cleric threw chess under the bus rather than focusing on the problem. This is both unacceptable and way too common.

* As a caveat, the media often calls every cleric the "top cleric" even when there is no "top" cleric or the cleric in question is not the "top" one.

Deedra is originally from Arkansas; an attorney in Scottsdale, Arizona; a Diversity Expert and Keynote Speaker for The Ambassador Project; and has a blog at askdeedra.com where she shares her perspectives based on questions and experiences. Follow Deedra on Twitter @askdeedra