How Can I Get Him to Stop Watching News and Sports 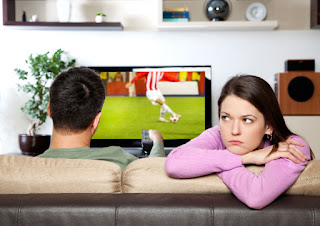 My husband comes home from work and just watches news or sports. This is such a waste of time. How can I get him to do other things?

Your husband has been at work all day. He probably experiences stress at work, particularly stress around many things that are "not within his control."

Sports and news have been found to be true "relaxation" activities for men - as hard as that is to believe for women who find neither "relaxing."

While women often see the news as negative and depressing because we have no control over the events reported, men often get an emotional boost from the news. Men watch the news and think, "If I were in charge we would not have these problems." He then feels better about himself, his abilities, and perhaps his masculinity.

While women may enjoy sports, men relate to sports as though they are the one actually calling the shots, making the goal or touchdown, or being the "hero." He feels "in control." Again, a boost to his self-image.

Studies have even shown that both sports and news increases a man's testosterone levels.

I am sure you have activities that give you pleasure [i.e. talking with other women about fashion, kids, etc] that would bore your husband to no end. Just like those things may be your "therapy," news and sports is likely his "therapy."

So, understand his needs are different than yours, then embrace his sports and news time - even if you do not join him.

You can also suggest other things you can do together. If you support his "television therapy" rather than resent it, you will likely find he is a little more open to occasionally doing other things - but only if those other things are at least of some interest to him, and not at the same time as his scheduled television events.


* Deedra is originally from Arkansas; an attorney in Scottsdale, Arizona; a diversity expert and Keynote speaker for The Ambassador Project; and has a blog at askdeedra.com where she shares her perspectives based on questions and experiences. Follow Deedra on Twitter @askdeedra
Posted by Unknown at 11:55 PM