The Incessant Use of Sex as Power and Control Over Women

When I read about the women in the Baltimore public housing being forced to trade sex for basic repairs, I became almost physically ill. Not only did I find the existence of this predatory practice in this day and age extremely upsetting, but it reminded me of a story from my own past that I had not thought about in many years. 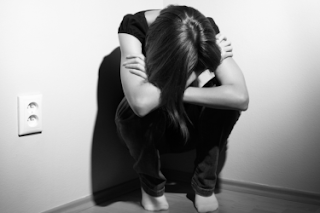 When I was about eleven or twelve, one of my sisters and I lived with my father. My parents were divorced. My father was our softball couch. He began dating one of the mothers of one of my teammates, who was also divorced. I will call the mother "Stacey."

My sister and I would often go to her home to hang out with her two daughters, who were about the same age as us, while our parents chatted in the kitchen or went out on dates. We also went there to hang out without my dad.

Another member of the team, "Laura," lived down the street. "Stacey" was friends with "Laura's" mom, so "Laura" would often join us. "Stacey" had HBO so we really enjoyed ourselves. I saw The Blue Lagoon for the first time at her home. [Probably not age appropriate.]

Once we were hanging out there, without my dad or "Laura," and found "Stacey" crying. Being all girls between the ages of eleven and fourteen, we of course tried to comfort her and asked what was wrong.

"Stacey" confided to us that a few years ago she was in a very bad way financially and had asked "Laura's" dad for a loan since she had been friends with his wife for many years. "Laura's" dad was very well-off.

He had agreed to the loan in exchange for sex, and had further stipulated additional sex as "interest" a"upon request" until she repaid the loan in full.  It had been going on for several years and now he was demanding she stop seeing my dad or he would call the full loan due immediately.

While all the other girls, including her own daughters, were crying with her and trying to comfort her, I, in my usual fashion, was stuck "in my head."

I first thought how inappropriate it was for her to share this story with children of our age, and particularly her own daughters.

My second thought was to wonder how the man could ask for such a price, first because he was married, second because his wife was friends with "Stacey," third because he was human [I assumed].

I wondered if this demand and exchange was common among adults.

I wondered what went through his mind when he was "receiving payment" from "Stacey."  Did he feel guilt? Did he feel anything?

I wondered what went through his mind when he saw his wife spending time with "Stacey."  I wondered if he ever worried that "Stacey" might tell his wife.

I then wondered if "Stacey's" kids might tell "Laura."

I did briefly wonder what I might do if I was faced with "Stacey's" dilemma. Two small daughters with no immediate money to feed or shelter them.

I did not spend much time on this line of thought as I already understood, even at that young age, how differently we can react when faced with our own individual crisis situations - though I did make a promise to myself that I would always strive to be self-sufficient and independent.

I also made a promise to myself that I would make every sacrifice I could imagine before I allowed a man to have any kind of power over me.

"Stacey" did end things with my dad. As far as I know, my dad never knew why. Neither my sister or I ever said anything to him. It was like we understood we had been let in on a most intimate secret.

But the story, stayed with me for many years - though I obviously did, eventually, forget about it.

The Baltimore article brought it all back: her brokenness, her despair, her victimhood.

To be honest, I would rather have not been reminded of it but more importantly, I wish no woman were subject to it in this day and age.

I wish with every part of my being the women in Baltimore had not experienced it either.

My heart truly goes out to them.


* Deedra is originally from Arkansas; an attorney in Scottsdale, Arizona; a diversity expert and speaker for The Ambassador Project; and has a blog at askdeedra.com. Follow Deedra on Twitter @askdeedra