I have been observing some discussions of Muslims on the subject of whether Muslims can give gifts to, or receive gifts from, non-Muslims during the Christmas season.

It was a very disappointing to hear the words coming out of the mouth of Muslims.

First, several Muslims referred to Christians as Kufar.  This demonstrates the extreme ignorance from the beginning. Muslims without knowledge sometimes refer to people who are not Muslims, or even Muslims who are not practicing according to their standards, as Kufar.

This is wrong on so many levels.

Kufar means an "unbeliever" - specifically, someone who refuses to believe (as in divinity). Allah was very specific in calling Christians and Jews "people of the book." Allah never, not once, referred to them as Kufar as a group. Allah did talk about hypocrites, but that was in reference to anyone faking their faith, including Muslims.

Kufar has never been legitimately defined as a person who is simply not Muslim, except by those who are ignorant of Islam.

We cannot randomly label a person identifying as Muslim as Kufar either because it is not our place to judge. Just because we observe a Muslim as not living up to the standards of Islam in the details we hold as important, we cannot know everything a person does out of our sight that might cause them to be a better Muslim than us.

Islam is clear on this point and there are so many stories to illustrate it (i.e. the prostitute who gave the dehydrated dog a drink of water; the man who spent every waking hour in the Mosque praying, but only because his brother worked and provided for him so he did not have to work, etc.).

In addition, some scholars have even gone further in explaining that Kufar is a person who is given the full and right evidence of God and still refuses to believe. - rejects any belief in God completely.  This definition actually indicates that very few people could be Kufar because Muslims often fail to relate the "full and right evidence" even when given the opportunity.

Secondly, the discussions focused on giving and receiving gifts from non-Muslims during the Christmas season as meaning Muslims are ratifying Christmas as legitimate, thereby committing a sin.

This could not be further from Islam.

The Prophet Mohamad, peace be upon him, advocated, expressly and continuously, the giving and receiving of gifts. The Prophet said, "exchange gifts, as that will lead to increasing your love to one another." He also said gifts soften the heart.

The Prophet accepted gifts and rewarded those for giving them. However, the Prophet did not once indicate a restriction on who to receive gifts from or to whom to give gifts.

There were several religions in the area of Mecca and Medina, including polytheists, who would have no doubt been practicing any number of religious celebrations during the Prophets lifetime. And yet Prophet Mohamad, peace be upon him, never once indicated, by action or words, that gifts should not be given or received, to or from, any person or group, during or at, any time.

The very fact that Muslims in the United States are having this discussion demonstrates a lack of understanding about not only Islam, but more importantly, the very essence of Islam and God. 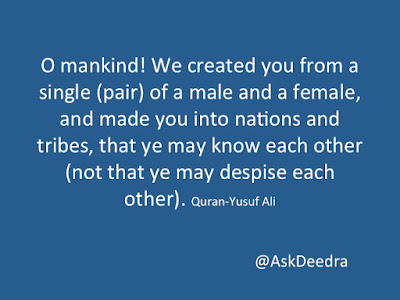