In my younger years I worked in a lot of restaurants.  Never fast food, always sit-down style. In the mid-nineties it was Steak & Ale, a fancy steak restaurant in Little Rock, Arkansas. Always a top choice for romantic dinners and special occasions. The lighting was low and the chairs had high backs, reminiscent of royalty chairs meant to remind us of the Renaissance Era and make us all feel like kings. I worked there for several years as a hostess and office assistant. Our uniforms were khaki knee length skirts, white button-up shirts, a navy blazer, and a red bow-tie.

Another girl worked there as a bar tender.  She had been there for many years, long before I started. She was probably in her late twenties or mid-thirties. About a year after I started, this girl got caught up in a drug bust. She was not involved in drugs herself but her boyfriend, who she did not live with, was evidently a drug dealer.  Unbeknownst to them, he was also well known to the DEA who was watching him closely.  One day the DEA decided to bust him. Unfortunately for her, they decided to do it while she was visiting him between shifts. She got arrested too.  Even though the DEA testified she was not involved, she was sentenced to a few years in Federal Prison (minimum sentencing requirements...whole other story).

When she was released on parole, she returned to Steak & Ale to ask for a job. She had a great work history with the company and was well remembered among the staff, so the company decided to hire her back. Unfortunately, conviction of a federal crime, any federal crime, comes with some parole restrictions. One of them is that a parolee cannot serve alcohol.

Her job as a bar tender was definitely out, but the company decided to hire her as a server and let other servers deliver her alcoholic drink orders.  Most employees were fine with it, but a few did complain that they did not get a cut of her tips for doing part of her service to guests. 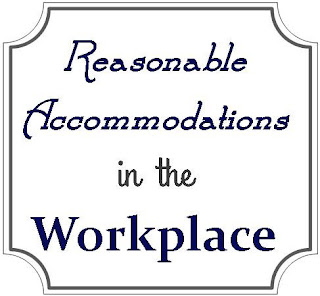 This is an example of a company choosing to make an accommodation. It is also an example how other employees may react. I thought at the time, and still believe, it was very commendable that the company made the accommodation. Many companies do make accommodations requested by employees, for various reasons.
Obviously this was not a religious accommodation.

Accommodations do not have to be due to religious beliefs or practices. And other than a few exceptions, no law requires companies to make them. But we are a diverse society and some companies value the diversity of their employees.

Have you ever experienced an accommodation in the work-place? Did others complain? How did your employer handle it?