Be A Voice Not An Echo - This Is Who We Are

After September 11th, the Muslim community was bombarded with media requests and presence. Still few people saw them.

By 2008, media were only interested after a major event or controversy. We were lucky if we got one media outlet to show up for a press conference or after a press release.

Muslims have had anti-ISIS, anti-terrorism, and peace rallies across the country. No body knows. The media does not cover it.

Muslims have tried to issue statements and have press conferences. The media rarely shows up anymore.

The most active local mosque received only 3 media contacts this week, even with the political rhetoric against Muslims.

The people may want to hear more Muslims speaking out, but the media has zero interest in it - not that previous Muslim's speaking out has made any difference.

We are left with trying to figure out what to do.

Muslims are human, with the same positive and negative characteristics as every other human.

Some Muslims go to the Mosque regularly, and some do not.

Some Muslims participate in interfaith activities and events, some do not.

Some Muslims love sports, some not so much.

Muslims are simply going about their lives trying to take care of their families and get through each day - like almost every other person on the face of the earth.

Muslims are monotheistic (belief in one and the same God) but not monolithic (intractably indivisible and uniform) in thoughts or ideas.

It is time we really flood social media with who we are rather than who we are not.

One way is through the #ThisIsWhoWeAre campaign.

It is consistent. It is positive.

It is in-line with what Muslims are feeling and expressing. 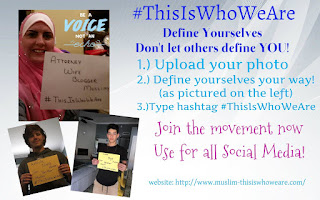 The idea is simple.

Take a picture of yourself holding a sign defining you, whatever that means to you, along with the hashtag #ThisIsWhoWeAre. Then post it to all forms of social media.

No one else can define us. We define ourselves.

It is time to take back our identity.

Not just our religion . . . but our very selves.