Never Underestimate the Power of the Ask

When I hear somebody sign, 'Life is hard,' I am always tempted to ask, 'Compared to what?' - Sydney J. Harris, Journalist

Cindy, a local business owner I had coached solution-oriented leadership strategies to, called me about a personal problem. She had been trying to help a friend of her son, both seniors in high school. The boy, "Jim" was the oldest of three children living with his "grandmother" because his mother had gone to jail. His "grandmother" was not really his grandmother. She was the grandmother of his two siblings from another father.

Being suddenly without a parent for support, and being in the top 10% of his graduating class, made scholarships a necessity and a possibility all at the same time.

He had also heard he was Native American, which would make him eligible for additional college assistance. Unfortunately, he did not have a tribal identity card nor did he know if he had ever been registered with a tribal entity.

The woman had already called the a tribal counsel and a local community college, both of which had been very helpful in telling her what documents he needed to get get his tribal card, to get into school, and to apply for several scholarships.

And that's when the real problems started.

The original birth certificate was not so easy. He was born locally, so Cindy drove him to the local Department of Vital Records. No luck. As a minor, only his parents or guardian could request a copy of his birth certificate. His birth certificate named no father and he did not know who his father was. His mother was in jail. Despite his only parent being incarcerated, and he was among three minors living with her, Child Protective Services had not granted his "grandmother" guardianship - nor did they require it.

That left three options: 1) the mother of his mother could apply as an immediate family member, 2) an attorney working with the mother, and on her behalf, could request the birth certificate, or 3) he could wait until May when he turned 18.

She was completely distraught about how to help this child. According to the Jim, his mother was so engrossed in her own problem of being incarcerated that she had no interest in helping him. Also according to Jim, his real grandmother was holding his current documents (including his original birth certificate and other personal documents) and refused to help him in any way. As for waiting until he was no longer a minor, that would mean he would miss all the deadlines for scholarship applications.

Which led to her call to me. In addition to being a corporate trainer for solutions-oriented leadership, I am a licensed attorney.

I explained to Cindy that hiring me to solve this problem was totally possible, but also very expensive. I could arrange to meet the mother in jail, get her agreement, and either mail or in-person request the birth certificate from the Department of Vital Records. All of that would likely rack up almost a day of attorney fees - not inexpensive by any stretch of the imagination. But if Jim's assessment of the situation was correct, Cindy might pay me all that money and still not get the birth certificate if the mother refused to cooperate.

Instead, I suggested we brain-storm other possible actions she could do that might be easier and would definitely be cheaper.

Cindy said both the tribal office and the community college had been very helpful. I suggested she call them back, tell them the situation and see if they have any suggestions. If nothing came of those contacts, I suggested she return to the Department of Vital Records and do the same.

Cindy mentioned how upsetting it was that the real grandmother was not interested in Jim's future. I asked her if she knew that to be an absolute fact. She admitted she didn't but was basing her opinion on Jim's assessment.

I suggested she ask Jim if she could call the grandmother, explain the situation, and allow her the opportunity to help - to be the hero. She was hesitant, but I then asked her what was the worst that could happen?  She says 'no'? How is that different than the current situation? And you never know, she might surprise you.

The next day Cindy called me back - ecstatic. The grandmother had been not only helpful, but grateful Cindy was willing to help Jim. The grandmother said she was just beside herself with grief because she had been unable to locate the papers. Cindy's assessment was that Jim was just young and had misunderstood the entire situation. 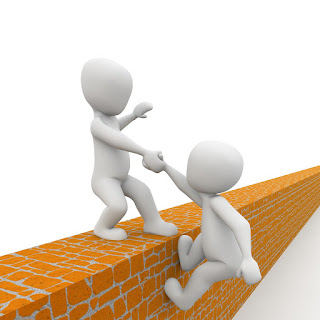 The reason for the "misunderstanding" is immaterial.

The lesson is in the ask.

Whether asking for help or asking for a sale, we tell ourselves "stories" about people or situations that prevent us from asking - we come up with reasons why they will say "no" and then use those reasons to justify not asking.

But deep down, it's really about our fear of rejection. Whether your self-worth is based on people liking you. Whether a 'yes' or 'no' represents acceptance or rejection for you.

And whether that is the scale you are using to determine your self-worth.

As I advised Cindy, ask yourself, "What is the worst that can happen?" Then ask, "What if they said 'yes'?"

Most importantly, always brain-storm potential avenues to find a way around obstacles. Who can you ask? Who has information? Who is the gate-keeper? Every time you run out of people on your list, brainstorm again, broaden your scope.

Don't get caught up in "rules." Don't get caught up in titles. Secretaries are often the real gate-keepers. Staff knows more about how to get around obstacles than most of the people at the top. Identify who to call, tell them the story. Don't go on forever, just get the points across. Ask for help. Ask for suggestions.

Never underestimate the power of the ask - or of a sympathetic ear.