It took me a long time not to judge myself through someone else's eyes. - Sally Field, actress 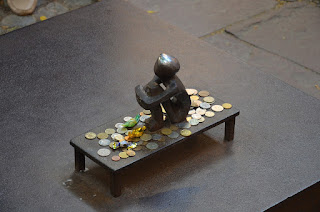 Unfortunately, this attachment of success to an outside source can cause real problems in the real world. Tests are subjective according to the person creating and/or grading the test - obviously essays, but also multiple choice because you can often interpret the question in more than one way.

But there are no "test scores" in the real world, so we end up relinquishing the measure of our abilities and success to those around us: our peers, our supervisors, our family.

Re-evaluating the litmus test for determining my success is a lesson and skill I learned when I went to law school.


It's never too late to be what you might have been. - George Eliot, novelist

It was a "late-in-life" career change. Being a lawyer was a dream I had since childhood but I never saw it as a possibility. It was out of my socio-economic view point. No one in my family, or extended family, had ever attained a degree so advanced. No one in my family's social circle had a similar profession. I thought only rich people could afford to go to law school because one of the requirements, at the time, was no employment during the first year at least. I assumed only the well-off could afford to go to graduate school without working to pay their livings expenses.

At this later point in my life, I could afford to not work for the first year - though not all law schools require non-employment any more.

Despite my worries, and with my husband's encouragement, I decided I would do it anyway.

The law school I chose, Summit Law School (formerly Phoenix School of Law), catered to non-traditional students and there were many student exactly in my position: 2nd or 3rd career change and more mature in years.

There I also found a friend, Jaclynn, who had the best response for making the change, "You're going to be 40 whether you go to law school or not."

I buckled down and gave law school my full attention, the best I had to give. We had mid-term exams, and when I received my scores I was completely distraught. Really crushed. I cried. A lot. I very rarely cry, as my husband can attest.

Immediately I scheduled an appointment with one of the assistant Deans, Karol Schmidt. Again I cried as I explained my situation of receiving an A, three B's, and even a C. She let me explain through my tears until I regained my composure.

Then she said, "Did you do your best?"

She said, "Is there anything you think you could have done differently?"

She said, "Then why are you upset? You know you did your best. You do not think you could have done anything differently. Grades do not show how hard you worked."

She then said, "Grades are just a scale. Why are you basing your value, your worth, on that scale? Why are you not looking at what you did, your best, and seeing that as your value?"

I stared at her blankly as what she was saying sunk in.

As they say, at that moment the world tilted - my entire world view changed in that instant.

Suddenly I realized, I had been basing my value, whether I was successful, on someone else's scale.

It also occurred to me that I was doing that on some level in all areas of my life - using someone else's scale to determine my evaluation of my abilities and my worth for myself in everything from school, to work, to my marriage.

What a rush of emotion and understanding!

I could change how I see me, how I see what I do, how I see everything, just by changing the scale that I used.

I could come up with my own scale - my commitment, my knowledge, my sweat, my desire, my effort, my stacks of ten accomplishments. There was no end to how I could more accurately decide what I thought about me as well as how I see what I do in my personal and professional life.

Oh the possibilities! Oh the freedom! Oh the loss of stress!


A man cannot be comfortable without his own approval. - Mark Twain, author

I went on to finish law school without stressing over grades but truly learning, passed the Bar the first time, opened my own law firm, became an author, and started a speaking career - all while continuing to improve myself, and my marital relationship, based on my own terms.

You should have no doubt, as I have no doubt, that I would have been stuck in the, "Who am I?" "What do I know?" "No one like me does those kind of things." mentality had I not re-evaluated my scale.

I created my own litmus test for what success means to me - which made life a much smoother and more enjoyable ride.

Yes, grades on important. You need them to advance educational levels, you may need them to be eligible for a small number of career opportunities, but they do not determine your worth.

The same for life. Yes, you sometimes have to conform but choosing to do what is required for a purpose (like advancement) should not translate into doing things in order to be seen as "valuable" or "worthy" in someone else's eyes, according to their scale. You can do what is necessary but have your own scale to evaluate how you are doing.

You only see you when you look in the mirror. How your eyes see you is the only scale that really matters. Make the scale a fair one for you.

Did you, or do you, based your "success" on grades?

Do you still base your value and worth on someone else's scale?

What new scale or scales could you use to evaluate how you see yourself and your work more accurately?