Leadership: Making Decisions Based on Your Company Values

It's not hard to make decisions when you know what your values are. - Roy Disney, Walt Disney's elder brother and the financier of his efforts


In my younger years I worked in a lot of restaurants.  Never fast food, always sit-down style. In the mid-nineties it was Steak & Ale, a fancy steak restaurant in Little Rock, Arkansas. Always a top choice for romantic dinners and special occasions. The lighting was low and the chairs had high backs, reminiscent of royalty chairs meant to remind us of the Renaissance Era and make us all feel like kings. I worked there for several years as a hostess and office assistant. Our uniforms were khaki knee length skirts, white button-up shirts, a navy blazer, and a red bow-tie.

About a year after I started, a co-worker got caught up in a drug bust. She was not involved in drugs herself, but her boyfriend, who she did not live with, was evidently a drug dealer.  Unbeknownst to them, his activities were well known to the DEA, who were watching him closely.  Unfortunately for her, the DEA decided to bust him while she was visiting him between shifts. She got arrested too.  Even though the DEA testified she was not involved, she was sentenced to eighteen months in Federal Prison (Federal Minimum Sentencing Guidelines...whole other story).

When she was released on parole, she returned to Steak & Ale to ask for a job. She had worked for the company since she was 21 years old, and most of that time as a bar tender. She had a great work history with the company and was well remembered among the staff.

Unfortunately, conviction of a federal crime, any federal crime, comes with some parole restrictions. One of them is that a parolee cannot serve alcohol.

Her job as a bar tender was definitely out. Hostess and busboy wages were meager and she was not qualified for kitchen staff. The remaining position, server, had the most need for the restaurant but the position usually included serving alcohol.

The company had a dilemma.


But the company also had a culture. Their culture was to support their employees and treat them as family. Many of the employees had been with the company for more than ten years, including her before her unfortunate situation.

The company made the decision to hire her as a server and require the other servers to deliver the alcohol orders to her tables.

Some of the newer servers complained. They felt that it was unfair that they were "doing part of her job" and wanted her to share a portion of the tips she earned as compensation for their "extra work."

But the company had fully considered their position. Servers often supported each other by delivering both food and drinks to other server's tables. The company had also hired underage servers before and required other servers to deliver alcohol orders.

The company and management were clear about their most important value - a family culture where everyone supported everyone else. 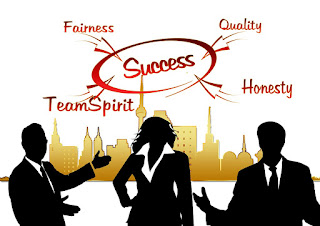 When we are faced with obstacles or unusual situations, we sometimes get so focused on the "rules" or "being fair," we often lose focus on what our values are and do not consider whether our decisions reflect our values. Our values are more important than "rules" - and "being fair" is actually subjective according to our values.

The management could have chosen the easier option: not rehire a quality employee that had been a valued member of the company for many years because she was unable to perform one small function of her job description. On the surface that would have seemed "fair."

But the easier option is not always the best option, especially if it goes against the values we profess to hold dear.

The management demonstrated solutions-oriented leadership not just by finding a way to support an individual employee but also to further solidify and reinforce the culture they wanted to maintain.


Do you know what your personal or company values are? Have you ever prioritized them to figure out the most important one or two values above all others?

Do you reflect on your values when making decisions, especially difficult decisions?

Deedra Abboud is the founder of the Global Institute of Solution Oriented Leadership, a "rising tide raising all boats" resource on the art and science of finding solutions, not fault - at work, at home, and in the community. She is an author, lawyer, and frequent media resource. When she's not helping clients or speaking at organization events, she's traveling the world.  At last count, she's been to 15 countries including United Arab Emirates, Germany, France, China, Egypt, Mexico, United Kingdom, Italy, and Turkey.
Posted by Unknown at 9:31 AM