Be Impeccable With Your Word

My interpretation of 'impeccable with your word' was: 'speak the truth,' 'keep your word,' 'do what you say, and say what you do.'

Once I read the book, I realized my complete misunderstanding. 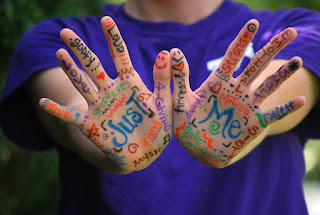 I now understand the agreement actually means 'use words for good, avoid using words in negative ways against yourself or others.' That is a simple explanation because the book's description goes even deeper than that - but it's a start.

While discussing the concept with a friend, Tara, she said maybe it should be 'speak impeccably.' I agree. Funny how using the same words in a different order gives the phrase a completely different meaning.

Words as concepts, our 'agreement' of those concepts, and our ultimate power to change our interpretation of ourselves and life by reinterpreting our 'agreements' of what words mean, is actually the real point of the book.

But my misunderstanding did not stop at the first agreement.

I assumed [a violation of the third agreement] this agreement meant to let things go, let them roll off your back.

On a simple level, that is true.

But on a deeper level, the agreement means everything really is not about you - that what people say and do is about them. It is not simply that you should not take things personally, but that they really are not personal to you - so you should not absorb someone else's emotional or self-directed vomit.

Someone else's truth is not your truth, and vice versa.

As much as we like to believe in one true 'Truth,' most of the time it is subjective. Even things that are scientifically 'proven' may or may not be true. As we gain knowledge and understanding, even our interpretation of scientific ideas can change.

We do not have to go back to history, as in for a long time the majority of people believed the world was flat and the sun revolved around the moon. We can just look at food and health - virtually every week a new concept is 'proven' about what foods are good and bad that completely differs from what we thought before.

Even the 'truth' about diet depends on what we believe - what we have agreed is true.

This concept is further illustrated by the placebo effect. When a person believes in a 'cure' the method, whatever it may be, is more effective. This has been documented repeatedly.

Our belief has a measurable effect on the physical world.

The Four Agreements invites you to explore what you 'believe' to be true and determine if those beliefs are hurting or helping you - and walks you through changing your belief system if you want to. Not changing to what the author believes but what you believe - which may or may not be the same as the author because you are you, not him.

Making an assumption that I understood the four agreements was exactly what I did. I assumed I understood the phrases, the meaning of the words. That could not have been further from the truth.

I knew that I should not make assumptions. You never know what others are going through so you should never assume you know why someone did something or acted a certain way.

Mostly we assume we already 'know' the answer and have no need to ask.

But asking questions is the key. It yet another method of gathering information, of seeing different perspectives.

Always Do Your Best

Again I had my own interpretation of what 'always do your best' means. The author explains that you always give 100%, but with the understanding and acceptance that sometimes your 100% percent looks different than your expected outcome. Your mood, your emotions, your energy level, your ability can all affect what 'your best' looks like.

I had this experience in law school. During the first mid-terms, I received As, Bs, and Cs. Other than algebra, I had never received Cs, not even in high school. Even Bs were unusual for me. I was crushed.

While visiting the Assistant Dean, I broke down in tears - which, as my husband can attest, is a rarity for me as well.

The Assistant Dean asked me if I did my best. I said, "yes." She asked if there was anything more I felt I could have done to prepare. I told her, "no."

She replied, "Then why are you upset? You know you did your best. You don't think you could have done anything differently. Grades do not show how hard you worked. Grades are a scale. Why are you basing your value, your worth, on that scale? Why are you not looking at what you did, your best, and seeing that as your value?"

That was one of the most enlightening conversations for me. Grades no longer were a factor, and I did much better during law school because I remained focused on 'doing my best' rather than worrying about grades - something I had little control over - especially considering law school grades are on a curve.

Accepting how your best can often look different than the expected outcome means you can shut down your negative self-talk with the response, a response you actually believe, that you did your best. You cannot beat yourself up if you know you did your best.

The most important lesson I received from this book was that I always have more to learn, more perspectives to explore - even among topics I have already covered or for which think I already have an understanding.

Deedra Abboud is the founder of the Global Institute of Solution Oriented Leadership, a "rising tide raising all boats" resource on the art and science of finding solutions, not fault - at work, at home, and in the community. She is an author, keynote speaker, lawyer, and frequent media resource. When she's not helping clients or speaking at organization events, she's traveling the world.  At last count, she's been to over 15 countries including Bahrain, China, Egypt, France, Germany, Italy, Mexico, Turkey, United Arab Emirates, and the United Kingdom.
Posted by Unknown at 4:00 AM