Concept of Pain in My Early Years

I remember getting my ears pierced. I do not remember my exact age but I was definitely under five years old because I had earrings in kindergarten. Each day when I would lay down for naptime, the posts poked the skin behind my ears and gave me ear aches - so I would remove them and place them on the floor beside my mat. Of course, I always forgot after I woke up.

I lost a lot of earrings, much to my grandmother's frustration.

My sisters and I all had our ears pierced at the same time at a salon down the street from our home on Eddie Lane in Little Rock, Arkansas. I wasn't scared at all; I was excited. I wanted earrings so bad.

My oldest sister, eight years my senior, went first. She cried like you would not believe. She screamed when the technician used the "gun" to do the piercing and cried for an hour afterward.

Now I was scared. I started crying a little bit but I really wanted the earrings, so I went ahead - expecting to feel pain like I had never felt before.

It was a small pop and poke. It was over before I even realized what had happened. The pain was nothing.

That was the first time I recognized people have different pain tolerances; that some people can handle things better than others.

The second time I thought about pain as a concept was when I had to get my vaccine shots for kindergarten.

The school, or clinic, or city, or whoever organized vaccines back then, had set up at a community center in Amity, Arkansas, and all the kids stood in a line for their turn.

I watched all the kids crying when they got the shots and crying as they were leaving.

I started getting scared.

When it was my turn, I sat on the stool and asked the nurse if it would hurt. She told me it would not hurt if I did not look.

My anxiety was getting out of control.

At the time, I interpreted my lack of pain from the shot as a result of me not looking. I now realize it was more likely because most of us jerk in anticipation of the needing going in, which often causes the pain.

I still turn my head when I get shots or even have my blood drawn.

Only one time have I felt pain - but that was because the nurse missed my vein. 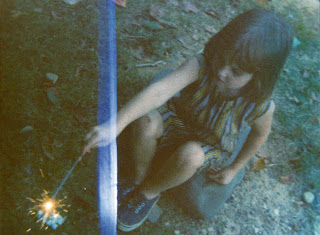 I hated bee stings. I swear, every time I stepped on the grass without shoes, I stepped on a bee. I am allergic to bee stings. If I step on a bee, I swell all the way to my knee. If I get stung on my pinky, I swell to my elbow. The sting itself is painful, but the swelling is worse - itchy and like your skin wants to burst.

The most I can do is take Benedryl and go to bed. The swelling goes down in a couple of days.

Surprisingly, it took several years for me to learn my lesson and not go outside, even just one step on the grass, without shoes. By middle school, I became a fanatic about wearing shoes outside.

Just as well, who wants to step on a nail - quite common when you live in the country - and have to get a tetanus shot? Fortunately, I learned my lesson before that happened to me - one of my sisters was not so lucky.

In addition to bees, I am allergic to Poison Ivy, Poison Sumac, and Poison Oak. Living in the country, coming into contact with these weeds is common - for me especially. I learned by middle school how to recognize the plants so I could avoid them.

Before that, I had many bad breakouts. I never got it in my eyes or mouth (about which I heard many horror stories) but on the arms, hands, legs, or feet was awful. You break out in the itchiest rash with blisters imaginable. Between the fingers and toes is murder. All you want to do in life is scratch the rash, but that is also how you spread it.

I would cover myself with a thick coat of pink calamine lotion and wear gloves so I couldn't accidently scratch. Benedryl was my friend again.

Then I just had to wait it out.

Once, I was playing with some older kids in the neighborhood. We went to a house on Lark Lane and started playing in the backyard of a two-story house that was empty. The family moved. I have no idea if it was for rent or sale, but no one lived there at the time.

A family that had lived there many years before had built a tree house in the backyard. A teenager, Brian, dared us to climb the tree house. We all said "no" because it was old and dangerous.

Brian climbed to the second level and began jumping on the "floor" board, saying "See, it is safe. I can jump on it with no problem."

I took the challenge.

I climbed to the second level and jumped on the "floor" board - and promptly fell through to the ground. We had no idea Brian was jumping on the sides, not the middle, of the board.

Though I fell from the "second story" to the ground, I had no broken bones or major bruises. I did, however, arrive at the bottom with a giant stick jammed into my underarm.

Brian, in his infinite wisdom, tried to help but only accomplished breaking the stick at the entry point. Then I just had a stick jammed into my underarm with a small portion visible.

I guess I should count myself lucky he was not "smart" enough to pull the stick out - who knows if it would have caused major blood loss.

I walked all the way home, alone, because all the other kids were scared to get in trouble for what happened.

Let's not forget I was less than eight-years-old.

We called an ambulance which drove me to the University Hospital. I remember the drive; it was painful. Every time the ambulance hit a slight bump, pain shot through my arm.

I also remember the nurse in the hospital room trying to distract me by having me squeeze her hand as hard as I could while the doctor removed the stick.

I still have the scar.

Deedra Abboud is the founder of the Global Institute of Solution Oriented Leadership, a "rising tide raising all boats" resource on the art and science of finding solutions, not fault - at work, at home, and in the community. She is an author, keynote speaker, lawyer, and frequent media resource. When she's not helping clients or speaking at organization events, she's traveling the world.  At last count, she's been to over 15 countries including Bahrain, China, Egypt, France, Germany, Italy, Mexico, Turkey, United Arab Emirates, and the United Kingdom.
Posted by Unknown at 4:00 AM