Children Know More Than We Think 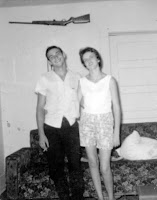 My parents were high school sweethearts. I am not sure my mom ever got over it - her first love.

They also had a very rocky relationship. I was two when my father left, so I have no memory of when they were together, but I heard stories. Without any first-hand knowledge, I can neither confirm nor deny the stories, but most of them revolved around my dad cheating on my mom and beating her.

I do remember my mom had a broken collarbone. The official story was that she fell down some steps - years later I "heard" it was a result of one of my father's beatings.

My family, like many of my generation, and I would suggest is still true, did not explain such things to children. That is too bad - because children hear more than we think. 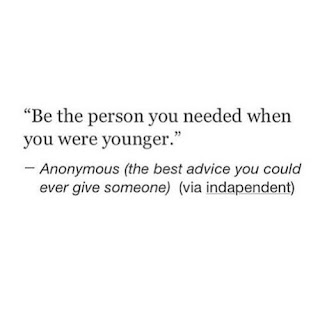 Children really are sponges for what is going on around them.  When we fail to help them understand what is going around them, often erroneously assuming they "don't know" and we are protecting them from the ugliness of life, children make their own associations about situations. Children make these connections based on little or no information, and no relevant life experiences.

The conclusions that children come to can be quite shocking and often shape their ideas about life in negative ways.

For me, the story about my mom "falling down stairs" and breaking her collarbone had two effects on my life.

First, I gained a fear of falling down steps. I still have that fear. I cannot see steps without thinking of my mom and her broken "back." [I did not know the difference between a collarbone or back, I thought they were the same thing.] To this day, more than forty years later, I am still extra careful when climbing up or down stairs because I do not want to fall down the stairs myself.

Second, at some point, I heard the nursery rhyme "step on a crack and break your mother's back." For years, I worried about stepping on cracks. I also thought someone, maybe even me, had stepped on a crack and caused my mom's broken back.

Oh, the simplicity, yet complexity, of a child's mind.

I spent years avoiding cracks like my life depended on it - or my mom's.

I did not break my habit of avoiding stepping on sidewalk cracks until I was in my teenage years. Even today, it still briefly crosses my mind when I see the cracks on a sidewalk.


As I got older, I also heard that each time my dad beat my mom her own father would respond, "Maybe if you would be a better wife he would not beat you."

My grandfather was a good man and never beat my grandmother, but he was a product of his time.

Considering he was a product of his time, perhaps he would have succumbed to the social norm had my grandmother not put her foot down in the early years of their marriage. 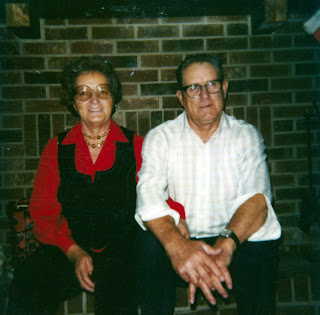 My grandmother once told me the story.

They were walking to "town." My grandmother was pregnant. Arkansas had passed a law that made it illegal to beat your wife while pregnant - for the safety of the unborn child.

It was still perfectly legal to beat your wife and born children, though. Go figure.

They got into some argument, she could not remember what about, and he raised his hand to slap her.

My grandmother said, "If ya hit me while I'm pregnant, you'll go to jail."

My grandfather responded, "Ya think I'm skeered a that?"

She responded, "Ya won't hit me more than once."

He asked, "And just wha'd ya think yur gonna do to stop me?"

She said, "Nothin'. But you gotta sleep sometime."

That story played like a movie in my brain. I never forgot it. My grandmother was definitely a woman before her time in many ways.

I learned the importance of not only having boundaries for how I would be treated but sharing those expectations as well.

For many years, my dad had a white van - his work van. He was a handyman but mostly worked on AC units.

The roads off the "highway" were still dirt or gravel - stayed that way at least until I left Arkansas in 1998. It was a long drive on the dirt road, through forests and past several fire lookout towers.

A story I often heard growing up was that my mom killed a giant snake. I don't remember it, nor do I know if us kids were there.

But this is the story as I heard it many times growing up. 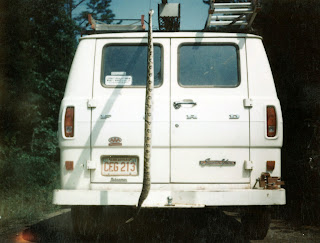 He could not allow everyone to see the snake my mom, not him, killed. Before he took the snake down, my mom snapped a picture.

That was my first experience with sexism. Each time I heard the story, I toyed with the scene in my mind. Each time I tried to understand why my dad was embarrassed, upset, and threatened.

I obviously did not know the concept of sexism until years later, but once I learned the concept, I instantly related it to this story.

I do not necessarily see the story as a negative reflection of my dad. It was the time in which they lived. It was normal then. Few people even recognized it, much less challenged it. It was just "how things were."

I think too many women are unaware of the history of women's struggles in America and that makes them vulnerable - it makes all women in our society vulnerable.

We see it in the political rhetoric around women's health, rape, and feminism.

There are still women who experience abuse and sexism in their relationships, at work, and in their neighborhoods. The reality is that many of them do not recognize the behavior,  or worse, think it is "normal."

After my dad had broken my mom's collarbone, she had had enough. Somehow, I have no idea how since laws were not on women's side at the time, she removed him from the house. Maybe she changed the locks. Maybe he found someone new and left on his own. All I know is that we stayed in the house, and he didn't. 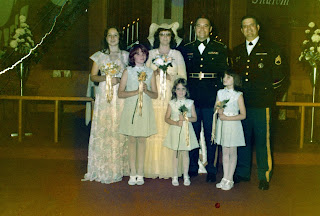 A few years later, at least the summer before my second-grade year, my mom married again. My step-dad was a Vietnam veteran and was a good man in many ways - even though I hated him for a long time because I was a momma's girl and he was taking away her attention from me, not to mention he brought his daughter who replaced me as the baby.

He also had a lot of problems. For one, he had survivor's guilt from his war experiences.

Once he told me his most anguished story.

He was the leader of a battalion in Vietnam. As a leader, he believed his place was always in the front of the troops, putting his life on the line for his men. One day they had been walking for days with almost no sleep, with my step-dad always at the head of the line. Everyone was exhausted. His second in command begged my step-dad to fall to the back of the line and let him lead so my step-dad could relax a little bit. He finally agreed, thinking he was probably putting his men in danger because his exhaustion was impairing his abilities.

My step-dad always felt he should have died that day, and that it was his failure as a leader that resulted in the death of so many of his men. He anguished that he would have seen the "boobie-trap" had he stayed at his place in the front of the line - or at least he would have died instead of his second in command who had been safely further back.

Survivor's guilt was only one of his problems.

Likely in his attempts to self-medicate due to his experiences in the war, he was a closet alcoholic. I never remember seeing him drunk, as in slurred speech and falling, but he always drank. It was fairly common for people in Arkansas to drink, usually beer, in the evenings and on weekends, which he did, but he also had to have a sip here and there at all times, often in secret. Bourbon and coke were his drink of choice.

Once, my three older sisters, my younger step-sister, and I were eating in the kitchen. We heard them arguing and then we heard some bumping sounds coming from the master bedroom. As kids often do, there was a dare for someone to see what was going on. At maybe six or seven years old, I took the challenge.

I snuck from the kitchen down the hall to the master bedroom. With my back pressed tightly against the wall, I slowly poked my head around the door frame.

I saw my step-dad straddling my mother on the floor, holding her arms down, talking to her intently. I do not remember what he was saying, I'm not sure I even recognized the words at the time, but that image is still burned in my brain. 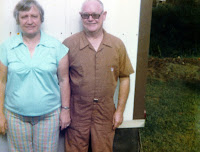 I still do not know what really happened that day. I was never scared of my step-dad, so I am not even sure I had any negative thoughts about it. Maybe I thought they were playing, horsing around.

I know he was a very patient and understanding man. Though he had no physical impairments, both his parents and his only sister were hearing and speech impaired - some of the nicest and loving people I ever knew. Whether because of that experience or not (no doubt he acted as the voice of his parents his entire life), I know my stepdad's empathy radar was strong, as I often found over the years.

The "stories" were often repeated by my sisters, perhaps their interpretations. I never heard anything from adults about it.

Yet another example of parents living in a dream world that kids don't know what is going on and trying to protect children from the ugliness of life.

We knew something was going on; we just didn't know what to do with the information.

Obviously, I had a lot to process around domestic violence and addiction growing up - and even more than these stories in fact.

I was a sensitive child, always looking at the world around me and trying to figure it out. Always evaluating what I liked, what I didn't like, and how to influence my world with my behavior.

I believe I latched onto my grandmother's ideas the most.

I knew at an early age I would never accept being abused... not physically... not mentally... not emotionally.  Though arguably the definition of all those things was a work in progress over the years.

Other members of my family were not so lucky.

But it all comes back to a lack of communication with children about the world around them. Not just what is going on in our homes, but what they see on television, movies, and the news.

Children always observe and absorb what is going around them. No amount of well-intentioned and wishful thinking parents will save them from drawing conclusions about what they see and hear.

The only way is to talk to them, listen to them, hear how they are processing things, and help them process things better.