I was introduced to disability from birth. As a result, I never thought anything about it. It seemed just as "normal" to me as any other difference between people: hair color, eye color, skin color, height, etc.

My grandfather on my father's side used crutches. 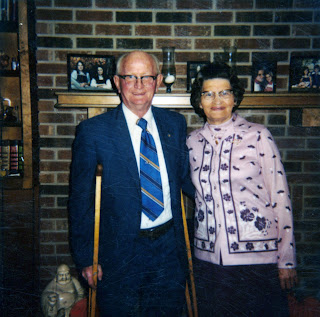 When my dad's family lived in California, before my parents even met, their car broke down on the side of the road. As my grandfather was at the back of the car, another car lost control and rear-ended his car. I think he fell asleep at the wheel. My grandfather tried to jump away, but one leg did not make it completely out of harms way - so he lost his leg from the knee down.

I was never close to my grandmother on my father's side - not sure why. She seemed so cold, we never felt comfortable with her.

Maybe she was just overly concerned with us not messing up her house, or maybe she never got over not liking my mom, or maybe she did not like kids, or maybe she just did not know how to show affection. Who knows.

But my grandfather was such a nice and happy man.

We used to sit in his lap. He would hug us, tell us jokes, and share stories. I remember him always smiling and laughing. 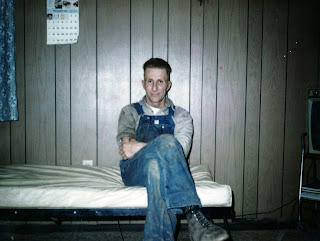 My grandparents had a friend in Amity named Austin. He was their age and his right arm stopped at the elbow - he called it his "nub" and it had two only partially formed fingers at the end. I think he was born that way.

We loved Austin. He played and teased us in nice ways. I always remember him smiling and laughing too.

We often asked to go visit him even after we became teenagers and adults. I felt much closer to him, like an "uncle," than any of my uncles or great uncles from either of my parents' side.

My grandmother was friends with a woman who lived on the main "highway" through Amity. We used to go visit her sometimes. She had an adult child that lived with her. I don't remember if it was her daughter or granddaughter. She had both physical and mental disabilities. The girl was in a wheelchair and had to be taken care of completely: feeding, bathroom, etc.

My grandmother told us she was a special child. That even though she looked like she was a big girl, she was a child like us. That we should be nice and patient with her.

Sometimes we played with her, sort off. We would talk to her or share our toys. It was easy because we had been going there since babies. In our mind, she was looking at us and having fun.

My grandmother had another friend that also had a similar adult child in a wheelchair living with them. She also needed complete care, had both physical and mental disabilities. I remember she mainly sat in front of the television all the time. We always played with her, in our own way, when we went to visit. She was less interactive with us, but we still imagined she was playing with us.

I was reminded of this girl years later when I saw the Twilight Zone: The Movie, third segment It's A Good Life. The powerful but immature boy, Anthony, used his magical powers to intimidate and punish anyone that upset him. He turned his sister Sara into a shell of a person sitting in a wheelchair watching television, with no mouth.

At the end of the street that connected to ours, behind some of the houses, there was a small creek. We used to go there and play with the bugs and pretend we were trying to catch fish. There was very little water, but we enjoyed splashing around in it.

A family lived in the house adjacent to the creek. I remember an older girl lived there, maybe a teenager. I remember she was disabled but I do not remember in what way other than being in a wheelchair. Her mom let us come in to play with her sometimes.

When my step-father came into our lives, sometime before my second-grade years, I was introduced to an entire hearing and speech impaired community. Both his parents could not speak or hear. They lived in Hot Springs, Arkansas. We visited them a lot. 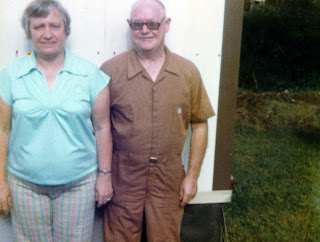 My step-dad was not hearing or speech impaired. His sister could hear but not speak. My step-dad often said he believed his sister was not impaired either but that she had chosen at a young age to not speak so she could be like her parents.

Then again, maybe he was a little bitter because all the responsibility landed on his shoulders almost from birth because he was able to fully communicate with the world around them - often having to "translate" for his parents to everyone.

They lived in a trailer and their television had words streaming across the bottom of the pictures. It was my first introduction to Closed Captioning. I thought is was the coolest thing to be able to read what was being said on television.

I still prefer to have Closed Captioning turned on when I watch television or movies at home.

I find it disappointing, though, that live Closed Captioning accuracy is often not that much better now than all those years ago - so many errors and skips. You would think we could do better.

I was also introduced to sign language. I learned the alphabet and some other words. I even had a t-shirt, which I kept until I was an adult, that had the entire alphabet along with the hand signs. It was a gift from my step-dad - the only one I remember actually, probably because I disliked him so much at the time.

I still know the alphabet but I wish I had kept that t-shirt. I really did treasure it.

All their neighbors were either hearing or speech impaired - or both.

They were also some of the nicest, friendliest, and happiest people. I often reflect on how they were so positive and loving despite living in a time that was not easy for them.

In second grade, the first half, while I was still at Watson Elementary, I met a new friend, Kathy.

I do not remember how we met, but she lived in the Sundale Homes trailer park off of Baseline Road, at least that is what is called now.

Her parents were also hearing and speech impaired, while she and her older brother were not.

I often visited her house and we played together. I didn't think her parents were different, likely because I had already been exposed by my stepdad's family.


My early experiences with disabilities shaped me. My grandmother never acted like they were "poor things." She always talked to them like people, like they could understand her. Whenever she passed a disabled person, she looked them in the eye and greeted them.

I learned that from her.

Interacting with people with disabilities also taught me how "normal" they really were, even if they were "different" than me or unable to do some of the things I could do.

So I was somewhat shocked, years later, the first time I read something about how people with disabilities wanted to be referred to and treated in society: don't avoid eye contact, treat us like you would anyone else, our disability is not contagious, we recognize when you treat us differently.

I was confused that it needed to be said.


Do you remember the first time you encountered a person with a disability? What was your reaction? Shock? Fear? Staring?

Do you think people's reaction to disabilities would be different if they were introduced at a young age or if their parents talked about it instead of ignoring it?


Deedra Abboud is the founder of the Global Institute of Solution Oriented Leadership, a "rising tide raising all boats" resource on the art and science of finding solutions, not fault - at work, at home, and in the community. She is an author, keynote speaker, lawyer, and frequent media resource. When she's not helping clients or speaking at organization events, she's traveling the world.  At last count, she's been to over 15 countries including Bahrain, China, Egypt, France, Germany, Italy, Mexico, Turkey, United Arab Emirates, and the United Kingdom.