The "Love" Trap for Women

I am originally from Arkansas and grew up Christian. I moved to Arizona in 1998 and became Muslim after many years of study.

Soon after becoming Muslim, a Muslim man approached a Muslim friend of mine's husband to ask about courting me - many Muslims “court” rather than date.

Courtship takes the position that the two people have no physical contact at all (no touching, no hand-holding, no kissing) until marriage. Many in a courtship relationship will not spend any time together until parents or other adult "chaperones" are present at all times. In addition, courting couples state up front that their intentions are to see if the other person is a suitable potential marriage partner. Courtship advocates claim that courtship allows for the two people to truly get to know each other in a more platonic setting without the pressures of physical intimacy or emotions clouding their view.

You know, like scenes from Little House on the Prairie - boy and girl sit on the porch or in the living room of the girl's family home.

The courtship also ensures the girl's "virtue" is preserved - nothing physical can happen between them because other people could walk into the room at anytime AND the boy cannot tell anyone something happened between them (lying to hurt her reputation in case of rejection or just male bragging) because they were never completely alone, there are witnesses to defend her honor.

We met two times.  After the second time, my friend's husband asked me if I wanted to marry the man. I was shocked. I said it is too soon to say, I do not know him yet.

He replied that I did not have to marry him immediately, nor did I have to set a date, but he wanted to know right then whether I would marry him as of that moment. I said no.

He then said he was ending the courting. I was again shocked. I did not know him! I had no way of knowing whether I liked him or not.

He said, no. The courting was off. He then explained to me the most extraordinary concept I had ever heard - but have since found it to be true.

He explained that my answer of "no" indicated I had already seen some red flags but that if I continued to meet with the guy I would become emotionally involved and then ignore the red flags. He explained red flags should never be ignored.

Once women are emotionally involved, they start living in a part of Egypt call Denial.

Denial is caused by many things, among them are:

1) Love makes women blind. This is great to a certain extent. Love makes women forgive all kinds of things, and that forgiveness is what keeps the human race from becoming extinct. However, that is a gift that should be given to those who deserve it - and red flags in the beginning of a relationship are a good indicator that the person is not deserving, at least for this relationship. Everyone has different red flags, so listen to your red flags in the beginning. If there are too many, let the next person have him. 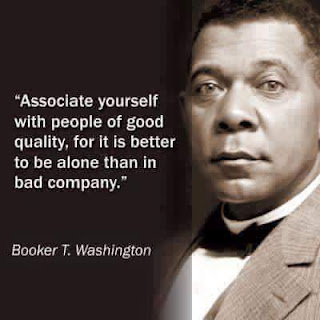 2) Fear of being alone. Nothing is more sad than a woman who puts up with an undeserving man simply because she is afraid of being alone. I told my husband in the beginning of our relationship (we have been happily married almost two decades now) that if I would be happier without him than with him, I did not need him. Our job is to make each other happy. If we cannot do that, we should not be together. Being alone is not the scariest thing. Being unhappy is the scariest thing.

3) Time invested. This is another sad one I hear. It is like gambling. "I have lost so much money I have to keep playing to try to get it back." There comes a time when you have to cut your losses. If you truly cannot make each other happy, better to stop the time clock now because the time will simply increase and will always be a factor.

4) Promises of Change. This one is more complicated. Change is not easy. It is neither realistic nor practical to expect anyone to completely change overnight. Change takes time. The measuring stick is not whether a person has made the changes, but whether the person appears to be trying - whether even baby-steps are happening. Baby-steps are good steps and should be recognized. No baby-step means changes are not happening. No changes at all mean no changes are likely to happen at all.

5) Continuously ignoring the problem. Some issues are minor and should be ignored. Which issues are minor and which issues are major is completely subjective to the individual.  Whether the issue is indicative of a major issue should be considered. Are you able to ignore the issue completely, or just bury it - only to have it come up as part of a melt-down? Is is a respect issue? Is it a character issue? Is it a belief issue?

6) Believing in Change - believing he will change or you can change him. This is a fantasy and the absolutely worst way to start a relationship. Never depend on change. You should want to spend the rest of your life with him exactly the way he is.

7) Occasional Good Outweighs the Bad. This is a balance. The good should outweigh the bad - particularly in the beginning. Remember, everyone is on their "best" behavior in the courting/dating stage. There should be way more good than bad at this stage. Anything "bad" will come out later, so anything bad at this stage should be strongly analyzed.

As I said in #2, being unhappy is way more scary than being alone. Remember, divorce means two people are unhappy - and having kids before divorce only increases the number of people unhappy. Better to be responsible in the choosing (assuming you have realistic expectations, which I am finding many young people do not), as well as willingness to work on the relationship going forward.

Factors that determine whether a relationship will survive, prosper, or go down in flames are many. It takes two to tango, so both of you, not just one of you, have to be willing to work and compromise at least a little bit.

The best plan is for a woman to know herself, identify what she wants (and does not want), and communicate. Do not allow yourself to fall into the "love" traps by ignoring the red flags in the beginning.

* Deedra is originally from Arkansas; an attorney in Scottsdale, Arizona; a diversity expert and motivational speaker with The Ambassador Project; and has a blog at askdeedra.com where she shares her perspectives based on questions and experiences. Follow Deedra on Twitter @askdeedra