The Tormented Characters of Boardwalk Empire

When I watch television or read a book, I really get into the characters. Like I know them personally. I can feel their anger and their joy, but I also analyze how I feel about their feelings and reactions - whether I agree with them or would do things differently.

The downside is that I have a difficult time being entertained 'with my brain off.'

For example, I have never been able to watch the show, Friends. From the beginning, I was constantly frustrated with the episodes - the situations and the characters. I have always said, "With friends like that, who needs enemies?"

My sister, on the other hand, loved the show. She always said it was a show she could just watch without having to think about anything.

Still, even with the constant brain engagement, one benefit is that I learn about myself and the world - as in what kind of person I want to be in the world - without having to directly experience all situations myself.

Just like observing real people, I use every opportunity to explore life through fictional characters.

Seeing different perspectives. Thinking about what logical reason a person would act a certain way. Wondering what drives people, or holds them back. All of these thoughts also increase my empathy and sympathy for those facing problems I have never faced. 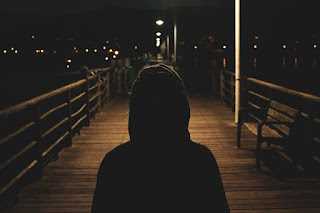 Last year I watched the series Boardwalk Empire. While watching it, I was really into the story and characters.

This year I have been watching it again with my husband. Watching it a second time has been very interesting. This time, because I already know how things will happen, I am spending more time focusing on why the characters are doing things. What makes them tick. What life experiences formed their decision-making process.

Analyzing the characters has also been interesting because I recently finished The Four Agreements, The Fifth Agreement, and The Dark Side of the Ligh Chasers: Reclaiming Your Power, Creativity, Brilliance, and Dreams. I have been seeing the characters through the lens of being your true self and embracing your dark side.

Though the characters may be fictional, their actions and reactions are based on how real people do act - at least one possible series of life choices and their consequences.

Three characters are of particular interest to me.

Jimmy is a genuinely nice and caring guy but he has been taught to 'come out swinging.' Though clearly conflicted, Jimmy constantly makes decisions and takes actions due to pressure from others. Things never seem to work out for Jimmy. It is not simply because he is doing 'bad' things or making 'bad' decisions, other characters do worse and things work out just fine. No, the problem is that Jimmy is acting according to his 'fake' self instead of his true self. Whether the creators intended this or not, his struggle between his 'real' and 'fake' self could not be more obvious.

Jimmy came from a messed-up family dynamic: a rich father that neglected him, a complicated relationship with a very manipulative mother, a confusing relationship with a 'father-figure,' and a non-traditional marital relationship. Jimmy also has what we now know is PTSD from his experiences in the war. But mostly Jimmy is part of a life, a complicated and violent life, because it's all he knows. All he really wants is to live a quiet life with his wife and son - but the people around him just can't seem to let that happen.

Margaret is both highly emotional and sexual - but does everything in her power to 'be' neither of those things. She tries to 'be' a 'good' person. She sees herself as different, better than, the other 'kept women.'  Always trying to 'be' the person her family and church told her she needed to be in order to receive 'love' and 'acceptance' from God and them. She has come up short since a young teen.

Margaret is absolutely riddled with guilt. She randomly makes rash decisions because a person can only suppress their true selves for so long - the suppressed traits will come gushing out at some point.  Margaret's life would be completely different, and she would be happier, if she would just accept herself, her life choices, her feelings, instead of always pretending to 'be' a different person.

These two characters more than any of the others portray deeply conflicted people. Their inner struggles are so clear - struggles between their real selves and the selves they believe they need to 'be' in order to please other people.

Jimmy and Margaret are tormented because they are carrying around so much shame and guilt. As Debbie Ford says, "We hide the shame, but then we do things to attract the shame." Which sums up exactly the actions and choices of both Margaret and Jimmy.

Both Margaret and Gillian are a product of their time. A time when women had few choices for survival - and even fewer choices once they were deemed 'impure.'

But Gillian Darmody is different. Though only snippets of her background are discussed, not even shown, Gillian had a much worse childhood than Margaret could imagine in her wildest dreams.

While Margaret wallows in guilt and victimhood, Gillian is a true survivor. More importantly, Gillian embraces that about herself. She accepts that she will do whatever is necessary to 'improve' her situation - never judging herself. By accepting herself, all parts of herself, she has zero guilt. She is at peace with every action or decision she makes. Others may judge her, but she is at peace, so every judgment or negative event just rolls right off her.

Gillian is just trying to take care of herself and those she loves - good or bad; it is the only way she knows how.

Gillian is no victim - definitely not in her own mind.

I am in no way advocating their lifestyle choices. Though they are fictional characters, their behaviors are a real, if dramatized - representing the real life situations people, particularly of that time, faced. Some of those choices, if less dramatic, are still real today.

The largest one being trying 'be' something other than who you are in order to 'please' others or gain the 'acceptance' of others. Making choices based on what you think you should do instead of what is in-line with your true self.

Being your 'true self' has gotten a bad rap. It has a negative connotation, but that is unfortunate because being your true self - warts and all - is the only way to be happy and the best foundation for making the best decisions. Pretending is exhausting and counterproductive.


What we do often becomes not our decisions but following what others want - almost always rooted in ignoring our own inner voice, our own desires. We know that is true when we have a negative feeling afterward. Feeling guilt or shame, taken advantage of, frustrated, angry, etc.

If we try to suppress our short-comings, they will seep out during stressful times. If we acknowledge them, accept them, and then consciously choose not to act on them, we gain control of our lives.

Recognizing that every decision, every action, we made brought us where we are today. "Each choice we make alters the direction of our lives," Debbie Ford. We would not be where or who we are today if even one decision or action had been different.

If we like where and who we are, we can see every experience, good or bad, as a blessing. Then we can start making decisions based on our true selves - though likely most of us need help separating our 'true self' from our 'fake self' after all this time.

If we don't like where or who we are today, we should first take stock. Are you taking your current situation or beautiful self for granted by not recognizing your many blessings and attributes? Can you not see how things could be worse?

Even average is better than rock-bottom.

Then you need to come to terms with, embrace, all your previous decisions as the best you could have done at the time. To paraphrase Maya Angelou, if you had known better, you would have done better.

Give yourself a break.

Start reflecting on your belief system. Not God necessarily, but why you believe things - like a belief that you or your decisions are 'bad.' Bad according to whom? Did someone tell you that? Did you observe people around you gossiping about people in a similar situation? Have you ever thought about why you label things 'good' or 'bad'?

Are those beliefs serving you? Are they benefiting you, helping you to do better, or just breaking your spirit on a daily basis?

Most importantly, start making your own decisions and taking ownership of those decisions. Maybe some of your decisions, on reflection, will not have been the best choice, but if you accept you are not perfect and learn from every action, you will not only improve your decision-making skills but will also feel more powerful.

Being free is not doing whatever you want without caring about consequences. Freedom is taking control of your life by making your own decisions that are a true reflection of yourself.