I converted to Islam in 1998. I analyzed deeply about whether I would continue to shake hands with the opposite gender before deciding to continue to do so.

The most important point being. . . it was my decision.

We live in a world where traditions, cultures, and demographics are constantly changing. People are exploring, rejecting, and adopting religious ideas, dress styles, and social interactions more than ever before.

As societies become more diverse, even without immigration, some traditions will survive and some will not. Mostly it will depend on the reasons behind the traditions and how well those ideas are articulated as valuable and relevant to an ever-evolving world.

When the Educational authorities in Switzerland recently decided to fine parents of students up to $5,000 for any student refusing to shake the hands of their teachers because two male Muslim students refused to shake hands with their female teachers, I reflected on my own evolution on this very topic.

Many people see this as yet another conflict between east and west. Some equate the refusal to shake hands with the opposite gender as a form of disrespect - indicating the refuser is following a sexist tradition of males being superior to females because, in this case, the students are male, and the affected teachers are female.

I cannot speak for these boys or their belief system, but whether Muslims shake hands with the opposite gender is not about gender equality.

It is much more common for Muslim women to not shake hands than Muslim men. If the students were girls refusing to shake hands with their male teachers, I doubt it would even have been a story. No one wants to force girls to let men touch them, not even in the west.

I am sure the Swiss had perfectly valid reasons for the tradition of students shaking the hands of their teachers at the start of each school day.

One suggestion is that those who do not want to shake hands with others based on religious reasons should wear gloves. When I visited a grocery store in Washington DC, all the cashiers wore gloves. Seeing them in gloves while exchanging money with me made me feel like they thought I was dirty. I can only assume others would have the same reaction if Muslims started wearing gloves in society. Clearly that would not solve the problem.


Many people do not shake hands.  For example, my niece and nephew, who are not Muslim, have germ phobias and try very hard not to shake hands with anyone. My niece has an autoimmune disease, resulting in a lowered immune system, and has very real concerns about becoming sick from touching others.

I am not sure how common this is in Europe, but it is a growing attitude in the United States. Dealing with these issues comes with the territory of living in a diverse society - and Europe is becoming more diverse.

The conflict is not east versus west and is not really about the tradition - it's about fear. Fear of the unknown.

The public outcry is solely based on erroneous assumptions about Islam.

The assumption creates the offense, not the refusal. 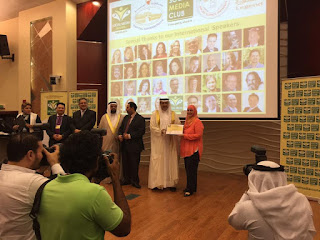 While some Muslims do not shake hands with opposite genders, Muslim women particularly, I would argue that it is not the majority by any stretch of the imagination.

In the Middle East, for example, shaking hands among opposite genders is very common, particularly in business situations, but even in social interactions. While speaking in Bahrain at the 2016 Social Media Masters Forum, both the mayor and governor shook hands with the women speakers, including me.

Whether Muslims are open to touch between genders indicates their personal interpretation of the religion, not the depth of their religious practice or belief.

I chose to shake hands, but I fully support the right of others to make a different decision for themselves. All of my decisions about my religious practice, from my dress to how I conduct myself, have been my decision. I would reject any legislative attempt to force dress codes or social interaction with others - even if those rules did not affect me.

Speaking out for the rights of others is the only way I can protect my own rights to make my own choices - whether those choices conform with the majority or not.

But let's look at the real, the unintended but huge, consequences of the legislation forcing hand-shaking between genders.

Girls, being the most likely to refuse to shake hands between genders, will become the most impacted by the law. As a result, girls will likely discontinue going to school or participating in society in order to avoid the physical touch requirement. Girls will be robbed of their own opportunities to learn, grow, and experience life to its fullest.

Instead of forcing Muslims to 'assimilate' - the stated reason for the law - it will force Muslims girls further into the shadows - the exact opposite of what the Swiss society intends.

In addition, child molestation victim advocates now claim we should not force children to hug and kiss adults because it makes them potential targets for child molesters. It teaches them 1) they do not have rights over their body or who touches them, and 2) it causes confusion about what is and is not appropriate touch. Definitely, something for parents to consider.

I am not suggesting handshakes will lead to child molestation - though my own experience has been that once I allow men to shake my hand all boundaries are broken and they too often start trying to hug me. Awkward!

I once gave a presentation about the culture of Muslims to some local teachers in Arizona that were expecting a large number of Muslim refugees. During the question and answer period, one of the male teachers stated he often hugs his students and asked if he should be concerned about hugging the female Muslim students. After advising him that Muslims are a diverse group with different ideas about hugging and it is always best to ask permission, I inquired why he was so comfortable hugging his students in today's climate of increased allegations of child molestation and inappropriate touching by teachers?

Our pure intentions are no defense when others assume we have bad intentions. It is a sad reality, but people often use our best intentions against us.

I met and married my husband, who is from Iraq, in 1999. Even though I had made the decision to shake hands with the opposite gender, I had decided not to hug them. That decision was based more on the reality that I am not a touchy-feely person than anything else.

My family has never been particularly touchy-feely but we do hug when we have not seen each other for a while. After I married, my sister and her family, who lived in Texas, came to visit me in Arizona. I have always been close to my sister and was also close to my brother-in-law, who I had known in high school before he even married my sister. He reached to hug me, but I held him back and shook his hand instead. I could see the feeling of rejection reflected in his eyes. It was not my intention, but it was there just the same. That look has haunted me for years and our relationship never recovered.

My husband's family, on the other hand, is very touchy-feely. Each time we see each other, even if we just saw each other the day before, the hugging and cheek kissing begins. I made it clear from the beginning that I would only hug and kiss the women in the family, other than my husband and his father of course.

After several years of marriage, I read a book. I do not even remember the name or what it was about, but it told the story of a man who traveled to Germany to close an already completed deal. German men give 'bear hugs' to each other. The businessman, who was American, was not used to that and refused. He lost the contract by offending the Germans. They interpreted his refusal as him being untrustworthy.

As I reflected on that story, I started thinking about my husband's family. Was I keeping them at arms length on a subconscious level by refusing to do the huggy-kissy thing?

I discussed it with my husband and the next time we greeted I surprised them. It was a transformation. I could almost tangibly see their comfort level with me increase. My choice to do the huggy-kissy thing with my husband's family had rewards that were well worth the small sacrifice I made by letting them into my space.

I still do not hug and kiss when greeting other men. My desire for cohesion within my family is different than with others, and I honestly cannot imagine non-family member men having that expectation - though I have found it is becoming more common for men in society to believe it is perfectly acceptable to randomly hug me without asking and before I have time to react.

Ostracizing ourselves is not an option, so we who are not touchy-feely do the best we can in a society that is becoming more touchy-feely every day.

Governments have the right, perhaps even the responsibility, to restrict behavior among its citizens. Everything from personal assault to driving regulations reflects this practice. Laws traditionally don't regulate how to touch people but rather how not to touch people.

The Swiss law, however, states a person must shake hands with another person. This is forcing behavior, not restricting it. Forcing behavior is traditionally the role of laws in dictatorships, not free societies. It is the difference between regulating the minimum requirements (no shoes, no shirt, no service) and forcing exact behavior (no entry without jacket and tie).

Once we start legislating personal conduct and personal interactions, we totally lose control of ourselves. We each have our comfort zones, and those comfort zones are completely individual. We have enough social pressure and do not need the government enforcing how we interact on a social level.

That is the exact opposite of freedom.

And contrary to what politicians and pundits are peddling, we all, even Muslims, want and love freedom - especially over our bodies.

Deedra Abboud is the founder of the Global Institute of Solution Oriented Leadership, a "rising tide raising all boats" resource on the art and science of finding solutions, not fault - at work, at home, and in the community. She is an author, keynote speaker, lawyer, and frequent media resource. When she's not helping clients or speaking at organization events, she's traveling the world.  At last count, she's been to more than 15 countries including Bahrain, China, Egypt, France, Germany, Italy, Mexico, Turkey, United Arab Emirates, and the United Kingdom.
Posted by Unknown at 10:06 AM