God: A Concept No One Owns

I participated in a small group discussion with several people about similarities and differences in our diverse American society. A Muslim woman commented she often felt she had to work extra hard in her profession to show her abilities because she was identifiable as a Muslim. She wears the headscarf. Another woman responded that she worked around people not of her faith but she never felt she had to demonstrate her abilities more because of her religion. She was sympathizing and went on to express how unfair that must feel.

As I know a lot of Mormons in Arizona, I asked the lady if she was Mormon.

She responded, "No. I am Christian." Pause. "Seventh Day Adventist."

I responded, "Isn't it interesting that you answered the question in that way?"

I saw the light go on in her eyes. She replied, "Isn't it?" She understood what her answer had indicated about her inner-belief system.

That is a problem I often seen. It is also a problem that few people see themselves. 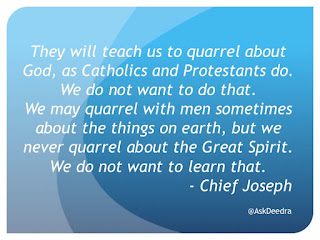 Over the years, many religious groups have struggled to find their place in American society. People in the "majority" do not understand the past and present struggles of minority Christian denominations to be accepted.

People may know history, but only from a philosophical level. They have never really thought about what it must have felt like living it.

The conversation I had was an example of that.

She answered that she was Christian, while, unconsciously, insinuating that Mormons are not. This is not unique to Latter Day Saints. I have heard similar "knee-jerk" reactions from a lot of Christians, whether "minority" or not.


Mormons have argued for years that they are Christian.  As have Jehovah's Witness, Assembly of God, Pentecostal, Mennonites, Anabaptists, Christian Science, and many more. Some would say they are still arguing but on a smaller scale.

The Mormons might even argue that they have not been accepted as full fledged Christians but simply are no longer being overtly persecuted. The acceptance of a more recent prophet seems to be a sticking point for most Christians.

Though many argue that the separate denominations do not indicate different fundamental common beliefs, making all Christians "one" religious group. Looking closely at the largest 35 denominations in the United States suggests otherwise - unless the only fundamental common beliefs are: belief in one God, creation, Jesus, forgiveness, salvation, the Day of Judgment, and the afterlife.

But then, Islam is in-line with all those basic common beliefs as well. As with all faiths, the difference is in the details.

The average Christian today does not spend a lot of time arguing over which groups claiming to be Christian are in fact "Christian," but that has not always been the case.

Just because the new argument has become whether non-Christian religious groups believe in the same God [is there more than one God?], does not mean the sentiment of who is a "real Christian" has gone away.

I have said for years that if all Muslims disappeared, the old argument of who is a "real Christian" would return in full force.

And that should concern us as Americans.

We really must start focusing on our commonalities as Americans - at the very least as humans. All faiths are compatible, if we only look.

Until Jesus comes back and sets us all straight, none of us will ever "win" any argument about God.

You do not have to be wrong for me to be right. It really is that simple.

But just like you do not want me to create laws for you based on my faith alone, I have no desire to live under a theocracy either - regardless of the foundation of the theocracy.

Because I realize, what I believe may not be the same as you believe. That does not mean we cannot have a fair and just society based on common beliefs - just that those beliefs should be a reflection of where we want our country to go for all people of our country, not just a few.

And we cannot do that if we are arguing over a concept no one owns - God.

* Deedra is originally from Arkansas; an attorney in Scottsdale, Arizona; a thought-leader and keynote speaker; founder of The Ambassador Project; and has a blog at askdeedra.com where she shares her perspectives based on questions and experiences. Follow Deedra on Twitter @askdeedra